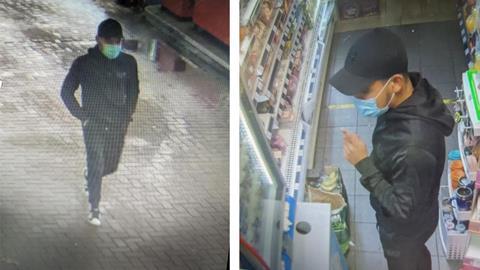 Officers from Gloucestershire Police are appealing for witnesses after thousands of pounds was stolen from a security worker during a robbery on a forecourt in Cheltenham Monday 6 December.

Police were called to the Texaco Garage on Lansdown Road at 3.20pm after it was reported that the worker was walking from the garage, and across the forecourt, when a man grabbed the cash box and ran in the direction of the town centre.

The offender was described as being a mixed-race man in his 20s, approximately 5ft 10ins tall and of a slim build. He was wearing dark clothing which included a black shiny tracksuit, black baseball cap and white Adidas trainers with black detailing.

Investigating officers have issued two CCTV images of the man and anyone who recognises him is asked to get in contact.

Police would also like to hear from anyone who saw the man running away with a sizable cash box or who was in the area and has dashcam/CCTV footage.

Information can be submitted online by completing an online form and referencing incident 256 of 6 December: https://www.gloucestershire.police.uk/tua/tell-us-about/cor/tell-us-about-existing-case-report/

Alternatively anyone with information can call police on 101, phone Crimestoppers anonymously on 0800 555111 or visit its website https://crimestoppers-uk.org.