Forecourt worker wounded by knifeman during robbery in North Yorkshire 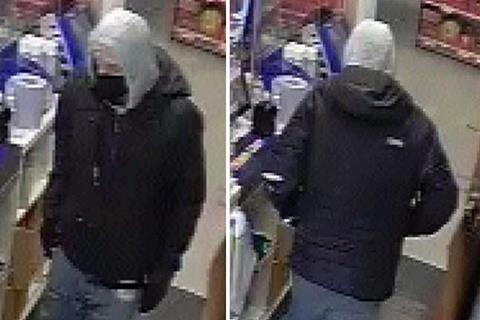 North Yorkshire Police is appealing for information after a member of staff was wounded during a knifepoint robbery at a petrol station in Cross Hills.

The robbery took place at around 5pm on Thursday 23 July in the BP-branded site on Station Road.

A man approached the counter of the shop and pointed a knife at a member of staff.

There was a struggle and the offender left with a small quantity of cash, in an unknown direction. The member of staff received a cut to his finger.

The suspect is described as aged around 20-25 years-old, approx. 5ft 9ins tall of slim build with green or brown eyes. He was wearing blue jeans, a black jacket, gloves and black face mask. He also spoke with what was described as a local accent

Police have released CCTV stills of the incident in an attempt to help identify the person responsible.

Information can be passed anonymously via Crimestoppers on 0800 555111.