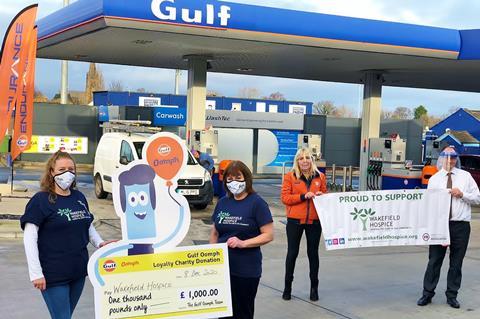 Oomph uses the latest technologies to drive new revenues to Gulf forecourts with customers collecting points every time they spend on the forecourt or instore. As well as big ticket monthly prizes and large savings on fuel and shop purchases, customers also have the ability to ‘donate’ points to local charities that have been nominated by Gulf sites.

For the staff and customers of many forecourts, this aspect has become the most rewarding part of the promotion, forging close and meaningful links with good local causes and grass root organisations.

One such beneficiary, nominated by Letterston Service Station in Haverfordwest, is The Paul Sartori Clinical Team who deliver Hospice at Home Services throughout Pembrokeshire.

“This wonderful donation could not have come at a better time,” said charity manager, Sandra Dade. “We are so grateful to the team at Gulf Letterston for nominating the Paul Sartori Hospice at Home Service and their wonderful customers who have donated. It has given our team a major boost.

The charity was already close to the hearts of staff and customers, according to acting manager of Letterston Filling Station, Brenda Lewis: “Oomph has added new impetus to our ongoing support for the charity with a donation of £1000 at a time when they desperately need all the support they can get. Our customers and the wider community have seen at first hand that Oomph offers much more than other forecourt loyalty schemes.”

Another beneficiary was Leicestershire-based #We Care UK, nominated by Knighton Service Station in Leicester. “This generous donation from Gulf Knighton will have a huge positive impact on vulnerable communities throughout Leicestershire during these unprecedented times”, explained Jason Bains, #WeCareUK founder. “The donation came at a time when it was desperately needed. #WeCareUK have used the donation to purchase toys and books for vulnerable children at Christmas. Thank you for helping us put a smile on the faces of hundreds of vulnerable children at this time.” 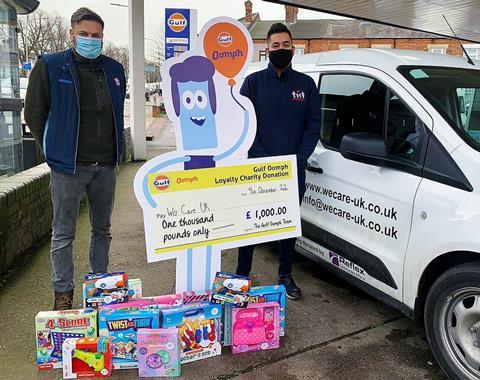 Randip Bath of Knighton Service Station said Oomph was an ideal promotional tool to engage customers and forecourt staff, drive customer loyalty and attract new business to site. “But that is just part of the picture,” he enthused: “The positive impact of Oomph as a force for good can be seen by all. This children’s charity touches a nerve with us, its local and grass roots and we know that £1000 will make a real difference.”