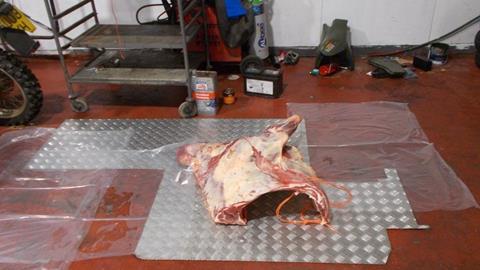 An owner of two hand car wash businesses has been jailed for 10 months for food hygiene offences after Wiltshire environmental health officers discovered he was running a large-scale butchery operation from the premises.

The risk to the public caused by his activities was deemed so widespread that the Food Standards Agency (FSA) put out a national alert to local authorities warning that any meat already sold must be recalled.

In addition to the custodial sentence Wiltshire Council officers also obtained a prohibition order preventing him from running any food businesses.

The judge who oversaw the case said: “It was a litany of offending over a prolonged period causing public health risks with potential for fatal consequences” and it was an “intentional and flagrant breach of the law”.

The charges related to the filthy conditions found and the illicit manner in which meat cutting was being carried out, following raids by environmental health officers supported by Wiltshire Police and the Food Standards Agency (FSA), at his two hand car washing businesses in October and November 2020. The raids led to emergency closures being executed by Wiltshire Council officers, who described the operations as some of the most shocking that they have encountered.

The defendant initially denied he had been cutting meat during the first raid in Devizes, telling officers he was using the bandsaw present to cut wood, despite meat debris being clearly visible on the machine.

He then suggested this was the first time he had been carrying out the activity. CCTV footage seized during that raid evidenced that unhygienic meat cutting had been carried out for several weeks.

Despite the first emergency closure and the seizure of meat during the initial raid and advice to the defendant of his obligation to obtain FSA approval for any future meat cutting operation, surveillance revealed Jakupi had moved the activity to his Ludgershall site without the necessary permissions or hygiene precautions, resulting in the necessity for the second search.

Councillor Ashley O’Neill, Wiltshire Council cabinet member for public health and protection, said: “I am pleased that we were able to pursue a conviction in this case, as it was one of the worst cases that our Food and Safety team have dealt with and the defendant concerned was putting the public at serious risk.

“I would like to thank our Food and Safety team for their hard work, and we hope that this sentence acts as a warning to others that this dangerous behaviour will not be tolerated.

Steve Smith, head of outreach and prevention at the FSA’s National Food Crime Unit, said: “The NFCU are pleased to have supported Wiltshire’s food officers with their investigation. This has meant that the significant food safety risks posed to consumers by the defendant’s activity and online sales across the UK were quickly identified, traced, and meat removed from sale. As a result of this collaborative work, the Food Standards Agency issued a FAFA notice to local authorities to ensure that meat already sold was recalled.

“The extensive number of food offences committed by the defendant had the potential to put consumers and their families at serious risk and this further highlights the importance of working with our partners and local authorities to ensure food is safe and what it says it is.”