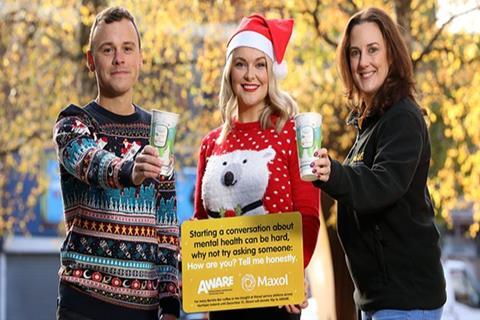 Maxol has launched its annual Christmas Coffee Cup campaign at selected service stations across Northern Ireland and is aiming to raise £20,000 for charity.

Between now and the end of December, for every Barista Bar coffee or tea bought at participating stores, Maxol will donate 10p to Aware, the local charity which supports people living with depression.

In a campaign first, this year Maxol, will be sharing some simple suggestions across their social channels on how to start a conversation about mental health with friends, family, or colleagues.

A series of informative clips will be published over the next few weeks and will feature Aware counsellors giving advice on questions to ask someone about how their feeling and ways to reach out to them.

“Supporting good mental health is hugely important but, we also recognise it can be difficult to start a conversation about mental health, especially when it is someone close to you. With help from Aware we have created simple suggestions on how to get the conversation started. You can see the content on our social channels and in selected stores too.

“So, if you are out and about in the coming weeks pop into a participating Maxol station and buy a hot drink and you’ll be helping to make a positive difference to many people’s lives.”

Clare Galbraith, head of fundraising manager for Aware said: “Since 1996, Aware has been offering support and education to thousands of people living with depression, anxiety, and bipolar disorder in Northern Ireland.

“In Aware’s 25th year, the launch of the Coffee Cup Campaign is more important than ever. With the ongoing impact of the pandemic, we have experienced a 40% increase in demand for our support services both in person and via Zoom between 2019 and 2021.

“During this same period, the number of people the charity has reached via social media has risen by 185%, while traffic to its website has increased by almost a quarter. The charity is currently expanding services to meet this increase in demand and will benefit hugely from the funds raised.”

Paulo Ross, Cool FM Breakfast Show presenter and Aware Ambassador said: “I am delighted to be part of this year’s campaign. As an Aware Ambassador I know the work they do, the support they provide and the compassion they show to service users and their families. I’m also delighted to see those conversation starters at the heart of this year’s activity which I’m sure will help many people finding it difficult to take the first step in talking about mental health.”