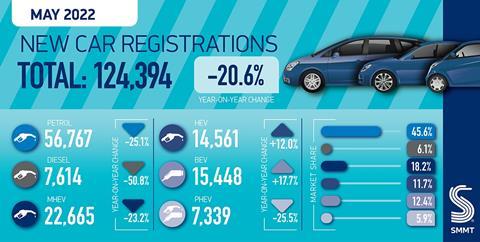 New UK car registrations fell -20.6% to 124,394 units in the second weakest May since 1992, as supply shortages continued to hamper new purchases, according to the latest figures from the Society of Motor Manufacturers and Traders (SMMT).

The decline, compared with the first full month of reopened showrooms in May last year, demonstrates the impact of continued global supply chain disruptions, with the market 32.3% below the 2019 pre-pandemic level despite strong order books.

While private consumer purchases fell by 10.3%, their market share increased year-on-year by 6.1% to 53.2%, in part due to manufacturers striving to fulfil deliveries – particularly of electric vehicles – to private buyers, with the commensurate effect on the business and large fleet sectors, which now comprise 46.8% of the market.

The SMMT reports that despite the myriad challenges affecting the industry and a high level of market distortion due to restricted supply of all vehicle types and technologies, manufacturers have worked hard to sustain progress towards the decarbonisation of road transport and the delivery of UK’s ambitious net zero targets. May saw registrations of battery electric vehicles (BEVs) rise by 17.7%, representing one in eight new cars joining the road last month. Plug-in hybrids declined 25.5%, while hybrids were up 12.0%, meaning deliveries of electrified vehicles accounted for three in 10 new cars.

Superminis continued to be the most sought-after segment by British motorists, making up 32.7% of registrations in the month, despite their registrations falling -16.4% to 40,667 units, followed by dual purpose, which accounted for 28.9% of the market even after a -14.1% fall in volumes. The small volume luxury car segment was the only area of growth, up 16.8%, to 369 units.

The supply chain challenge has contributed to an overall market decline in the year to date of -8.7%, equivalent to 62,724 fewer units, says the SMMT. This is 40.6% below the five-year average recorded from January to May, as the new-car market continues to struggle to emerge from the impact of the pandemic.

Mike Hawes, SMMT chief executive, said: “In yet another challenging month for the new car market, the industry continues to battle ongoing global parts shortages, with growing battery electric vehicle uptake one of the few bright spots. To continue this momentum and drive a robust mass market for these vehicles, we need to ensure every buyer has the confidence to go electric. This requires an acceleration in the rollout of accessible charging infrastructure to match the increasing number of plug-in vehicles, as well as incentives for the purchase of new, cleaner and greener cars.

“Delivering on Net Zero means renewing the vehicles on our roads at pace but, with rising inflation and a squeeze on household incomes, this will be increasingly difficult unless businesses and private buyers have the confidence and encouragement to do so.” 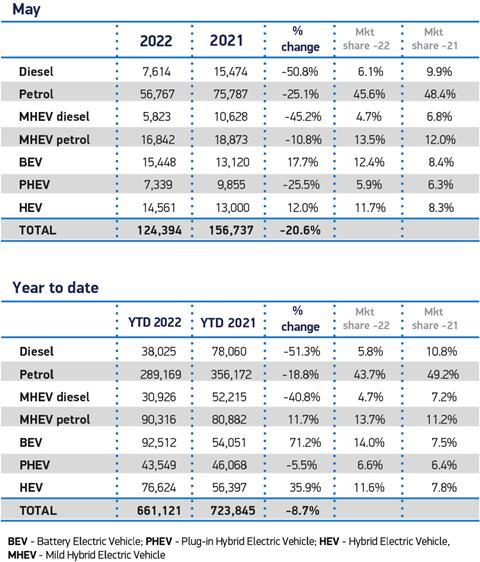