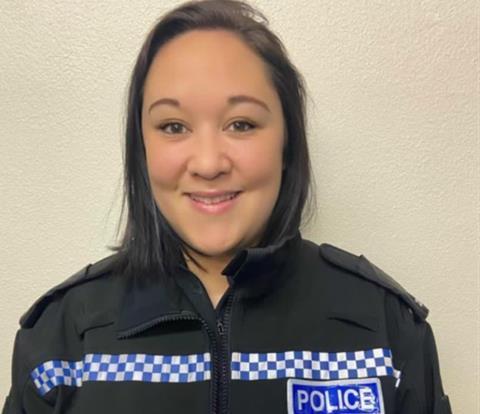 A Hampshire Police officer has been nominated for a National Police Bravery Award after putting her life at risk to save the lives of other during an incident at a forecourt.

During the early hours of 23 September 2020, PC Jade Rudd attended a petrol station, in Aldershot, after being called to a report of a man who had doused himself in petrol and was threatening to set himself alight.

When she arrived, she saw that the man was carrying a lighter and a lit cigarette, and was threatening to set himself on fire.

There was a clear danger to not only the man himself, but to others in and around the petrol station, so PC Rudd directed everyone else to safety.

Despite the danger to herself, she approached the man and managed to move him away from the petrol pumps and onto a pavement. She was then able to use her negotiation skills to persuade him to put the cigarette out and allow her to take the lighter.

He was then arrested and PC Rudd made sure he got the medical assistance and mental health support he needed.

PC Rudd, said: “Police officers display acts of bravery every day, and I acted in a way any police officer would.

“Dealing with this particular incident was very much a team effort. Without the support of my colleagues both on the ground and on the end of the radio we would not have been able to get the gentleman the help he so desperately needed.

“Sometimes people think that police officers just arrest people, but this is certainly not the case. We’re often the first people at the scene of an incident and we’re faced with a wide range of issues, which aren’t always directly related to policing.

“I am pleased to have been nominated for something outside of the ordinary job we deal with every day.”

Chief Constable Olivia Pinkney, said: “I am immensely proud of PC Rudd and what she did to ensure that lives were not lost that day.

“She selflessly put the lives of others before her own in what was an incredibly dangerous situation and she deserves this national recognition for her brave actions.

“Every day our officers and staff come to work not knowing what they are going to be confronted with but do so with great professionalism and courage to serve and protect our communities. We all wish PC Rudd the best of luck.”

The National Police Bravery Awards honour officers from across England and Wales who have performed outstanding acts of bravery while on or off duty.

PC Rudd will attend an awards ceremony in London on Thursday 9 December.