* The Fuel Barn will evolve with the transition from traditional fuels to EV and other fuels of the future.

* It will open with 54 electric vehicle charge points, with the capacity to increase this number when required. 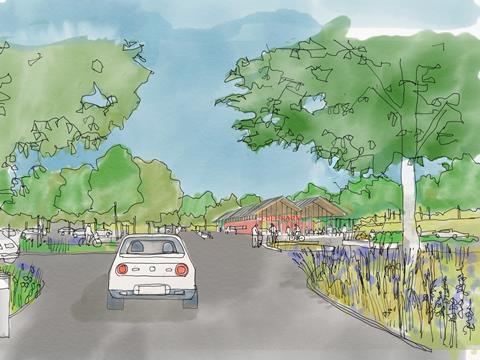 A virtual public consultation is currently running on a proposal by the Westmorland Family and the Tatton Estate to create a new motorway service area on the M56 in Cheshire.

Tatton Services is proposed to be sited at junctions 7 and 8 to address a number of gaps in motorway service area provision in the current strategic road network.

It is an 80/20 partnership between the Westmorland Family, the award-winning family-owned motorway services business, and landowners the Tatton Estate. Westmorland’s Gloucester Services site on the M5 was winner of Forecourt Trader of the Year in 2015.

The companies say the ambitious project has been conceived with sustainability at its heart, describing it as a - “a beacon of quality embracing the positive changes taking place in the building and transport industries, Tatton Services will champion its locality and bring social and economic benefits to East Cheshire by sourcing local produce and creating around 300 jobs”.

The Westmorland Family is renowned for its unique approach to motorway services. It began with Tebay Services in Cumbria, opened in 1972 by farmers John and Barbara Dunning when the M6 was built across their land. Now led by the second generation of the Dunning family, it also owns and operates Gloucester Services and Cairn Lodge Services in Lanarkshire, businesses that are integrated into their places through local sourcing, local employment, and landscape-sensitive buildings.

Tatton Services will be based around the same Farmshop & Kitchen concept that makes Tebay (which recently appeared in a four-part Channel 54 series ’A Lake District Farmshop’), Gloucester and Cairn so exceptional within the industry. Instead of franchises, it will provide rest, refreshment, and relaxation for drivers by serving freshly cooked food, made from scratch as it would be at home.

Its Farmshop will showcase the best of the local area to the drivers passing through, giving benefits back to its neighbouring communities. The Westmorland Family has a strong track record in nurturing local producers and supporting them to thrive, and it aims to work with at least 130 suppliers within 30 miles of Tatton Services and a further 70 across the North West.

The Westmorland Family regularly works in partnership to bring together the best knowledge and skills for its individual businesses. The Tatton Estate is also family-owned and has delivered numerous diversification projects creating jobs and opportunities for young people, as well as increasing their investments in food and farming operations and delivering environmental enhancements.

The consultation reveals that Tatton Services has been conceived as a national exemplar of MSA buildings. Water management, landscaping and planting schemes will enhance biodiversity, while renewable energy use, future fuels and the creation of low embodied carbon buildings will drive carbon reduction.

The design is inspired by a farmstead. It consists of three buildings crafted from natural materials, including heavy timber. The Farmshop & Kitchen (amenity building) and a 100-bed hotel will be arranged around a Kitchen Garden that travellers can relax in. The Fuel Barn will evolve with the transition from traditional fuels to EV and other fuels of the future. It will open with 54 electric vehicle charge points, with the capacity to increase this number when required.

A virtual public consultation is running until 23 August and includes live webinars. It is hoped that public exhibitions will also be held in the locality, subject to any restrictions that may be in place. For more information and to view plans and dates for public events, people are encouraged to visit www.tattonservices.com.