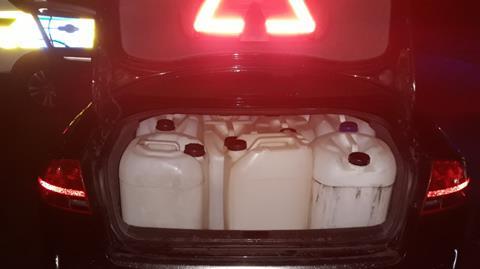 Rural Taskforce police officers have arrested three men on suspicion of preparing to steal fuel from lorries in North Yorkshire.

North Yorkshire Police have been conducting patrols of lorry parks, focusing in particular on the Hambleton district, following an increase in thefts from HGVs, including diesel fuel.

At about 10.45pm on Friday 21 August, officers from North Yorkshire Police’s Rural Taskforce were on patrol when they noticed an Audi A5 being driven close to lorries in the car park of Thirsk Auction Mart.

The car was stopped and searched. There was a strong smell of diesel inside the vehicle, and officers found 11 empty 25-litre plastic drums packed into the boot – and another four balanced on the back seat.

Three occupants, all men in their 20s from the Cleveland area, were arrested on suspicion of going equipped for theft. They have been released under investigation while enquiries continue.

Proactive police patrols are continuing across North Yorkshire to protect HGVs, and drivers are being urged to take precautions:

If you are aware of suspicious activity around parked lorries, contact the police. Call 101, or 999 if it’s an emergency or a crime is in progress.