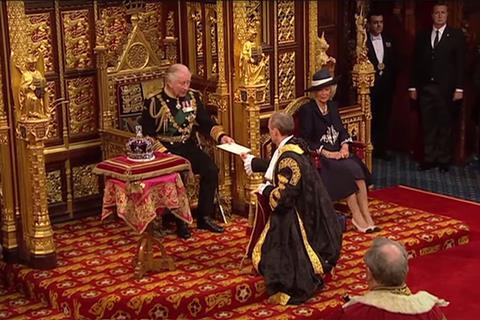 Prince Charles delivered the speech on behalf of the Queen

Retailers’ trade associations have welcomed commitments made by the government in the Queen’s Speech to regenerate town centres and high streets, and protect consumers’ access to cash.

Measures proposed in the Levelling Up and Regeneration Bill, include:

The Association of Convenience Stores (ACS) chief executive James Lowman said: “We welcome the intention of the Levelling Up and Regeneration Bill to support town centres and high streets, but urge the government to recognise the importance of the thousands of local shops operating in secondary areas, estates and villages that continue to keep their communities going and should be a core part of the levelling up agenda.

“We await further detail of the Levelling Up and Regeneration Bill and how the government intends to legislate to achieve the missions set out in the White Paper on areas like crime, health and connectivity, and will continue to engage with the Department for Communities and Local Government on how local shops can play their part in levelling up the UK.”

Also in the Queen’s Speech was the announcement of a Financial Services and Markets Bill, which aims to protect consumers’ access to cash through the continued availability of cash withdrawal and deposit facilities throughout the UK.

Lowman added: “We are encouraged by the government’s commitment to protect access to cash through new legislation. Cash is still an incredibly important way of paying for goods and managing money for millions of people, and convenience stores play an increasingly important role in being often the only provider of ATM services locally.”

The Federation of Independent Retailers (The Fed) also welcomed action on access to cash, the levelling up agenda, business rates and crime that were proposed in today’s Queen’s Speech but warned the devil is in the detail.

The Fed’s national president Narinder Randhawa said: “We are pleased to see that the government shares the concerns of independent retailers around access to cash, business rates, crime and regenerating high streets and we urge it to tackle these issues with the energy and priority they deserve.

“As well as wanting the government to move quickly, it is vital that it works with trade associations like The Fed regarding the detail to ensure that small businesses get the help and support they deserve.”

However, Randhawa expressed disappointment at the lack of support for small businesses that are struggling amid soaring bills.

He said: “This year has seen huge increases in overheads and operating costs, threatening local shops who are the beating hearts of their communities. We are disappointed that measures to help ease the burden on hard-pressed independent retailers have been missed out of the Queen’s Speech and would urge the government to look at these as a matter of urgency.”

Other Bills announced in the Queen’s Speech affecting affecting the retail sector include a Non-Domestic Rating Bill, which aims to modernise the business rates system and incentivise investment, a Brexit Freedoms Bill to repeal and reform regulations on businesses, and an Energy Security Bill to protect against global price fluctuations in energy costs.