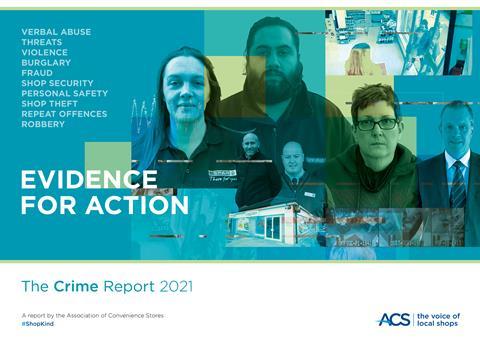 The Association of Convenience Stores (ACS) has welcomed a new report from the Home Affairs Committee on violence and abuse towards retail workers, which urges the Government to do more to protect people working in local shops.

The Committee’s inquiry into violence and abuse against retail workers, chaired by Rt Hon Yvette Cooper MP, was launched in December 2020, and took evidence from ACS, USDAW, the BRC, Boots and others during a series of evidence sessions earlier this year.

Referring to evidence from ACS that 89% of people working in local shops have suffered some form of abuse over the last year, the Committee’s report goes on to make a series of recommendations, including:

On the creation of a new offence, the Committee’s report states: “We believe that retail workers must also be recognised, and that offences against them must be treated with additional seriousness, with extra protection from the law. The Government should consult urgently on the scope of a new standalone offence. A clear message must be sent that nobody should feel unsafe at work.”

The ACS says the Committee’s recommendations are at odds with a Government statement from last week, rejecting an amendment to the Police, Crime, Sentencing and Courts Bill that would introduce tougher penalties for those attacking retail workers.

ACS chief executive, James Lowman, said: “This is a landmark report that should form the blueprint for tackling retail crime and violence against retailers and shopworkers. The report has identified the right measures to improve police response and the courts treatment of repeat offenders, particularly those with addiction problems that need effective rehabilitation.

“Existing powers, structures and legislation are not working. We need meaningful change, and the Government should adopt all the committee’s recommendations.”

Chair of the Home Affairs Committee, Rt Hon Yvette Cooper MP, said: “Everybody should be safe at work. Shop workers are the lifeblood of our local high streets and communities. During the Covid-19 pandemic, retail workers kept our communities going and they deserve our thanks and gratitude. It is even more shameful, then, that abuse and assaults against shopworkers went up during the pandemic, and it is completely unacceptable that these attacks have become so commonplace in our society.

“Yet too often the police have not taken these crimes seriously enough and workers have been left to deal with the traumatic consequences alone. Those who abuse and assault shop workers must not be allowed to reoffend with impunity. Policing leaders must step up and make this a priority for local forces – with more neighbourhood police, clear plans to identify repeat offenders, respond to incidents swiftly and better record and understand patterns of local crimes.

“Other public workers have rightly been afforded extra protection by the law in recognition of the public service they provide and the increased risks they face, and a standalone offence for assault on emergency workers has produced promising early results in increasing prosecutions. Violence and abuse towards shop workers must be treated with the same seriousness and those workers must be afforded similar protection in law.”

The ACS refers to its 2021 Crime Report which states there were 40,000 violent attacks against people working in convenience stores and 1.1m incidents of theft over the last year, many of which were committed by repeat offenders with a drug or alcohol addiction. The report also shows that there have been over 1.2m incidents of abuse over the last year, which often go unreported.

ACS is currently co-ordinating with the Home Office, Crimestoppers and over 100 leading retailers in the UK on the ShopKind campaign, urging consumers to be respectful of others while in stores. Campaign materials for retailers are available to download on the National Business Crime Centre website here.