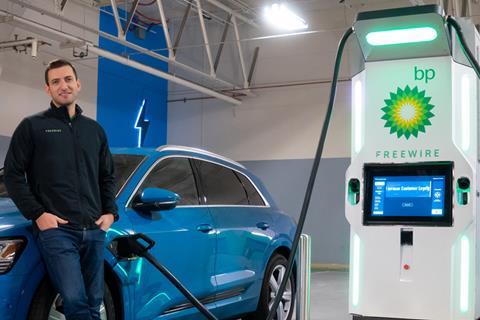 BP pulse has signed a provisional deal with FreeWire Technologies, the US developer of portable EV charging, to deploy FreeWire’s Boost Charger across the UK.

The two companies said the deal would provide a significant step forward for BP pulse (the new name for BP Chargemaster), as FreeWire’s technology enables faster and more widespread charger deployment due to its battery-integrated charging technology, removing the need for every ultra-fast charger installation to have a high-power grid connection.

The initial agreement between the two companies, which if finalised could be valued at more than $50m, is intended to help BP pulse to meet its goal of operating 700 or more ultra-fast public chargers by 2025.

“At BP pulse we’re committed to delivering fast, convenient and seamless charging to our customers. FreeWire’s Boost Charger can be an exciting addition to our EV charging solutions, allowing us to expand our network faster, and in more locations than previously possible,” said Ross Mabon, chief operating officer of BP pulse.

“In creating a truly nationwide ultra-fast charging network, this technology will help us to provide coverage in areas where securing new, larger grid connections would make installing such infrastructure more challenging. We’re delighted to have made this initial agreement and look forward to progressing to a full contract.”

“We’re thrilled to be working with and supporting BP pulse in its ambitious plans to deploy widespread ultra-fast charging infrastructure across the UK,” said FreeWire CEO Arcady Sosinov. “As a leader in the UK charging market, BP pulse is keenly aware of grid limitations and the challenges of delivering ultra-fast charging in certain locations.

“This agreement is a strong recognition of the benefits of battery-integrated charging technology and its ability to accelerate an all-electric future.”

This can remove costs associated with grid upgrades and means significantly more locations will be able to provide ultra-fast charging.