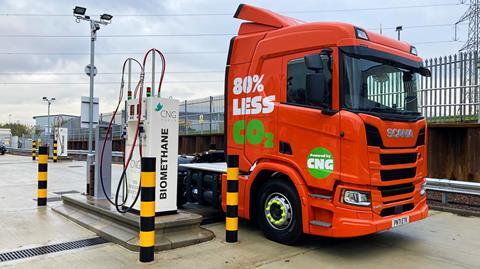 The new station, located adjacent to the busiest transport route in Scotland between Edinburgh and Glasgow, puts Inverness and Aberdeen within range of CNG Fuels’ low carbon refuelling network for the first time.

The site can refuel up to 450 lorries per day with biomethane sourced from food waste, and it is estimated the new station will cut 70,000 tonnes of greenhouse gas emissions each year when fully utilised.

Philip Fjeld, CEO of CNG Fuels, said: “Glasgow and Scotland were at the centre of the world debate on climate change during COP26, injecting urgency into the global push to tackle the climate crisis. Our new station, just outside Glasgow, is an example of real-world action on climate, unlocking low carbon deliveries across the busiest transport routes in Scotland and supporting the country to meet its emissions reduction targets.

“Renewable biomethane is the cleanest, most cost-effective solution for HGVs available today. Our growing network of refuelling stations gives fleets across the country the confidence to significantly cut emissions from transport, today.”

According to CNG Fuels, demand for renewable biomethane has increased by 1,000% in the past five years as brands seek to reduce emissions in line with the UK’s net zero plans. This trend is set to continue, with demand forecasted to increase five-fold in the next five years as the UK government’s 2040 ban on the sale of new diesel HGVs, announced last month, approaches.

The new station, located at the Eurocentral industrial estate off the M8 near Bellshill, will support both local Scottish fleets as well as brands making low-carbon deliveries from England to Scotland. The station is also located within proximity of two HGV dealerships – Scania and Iveco – which manufacture biomethane-ready HGVs.

The Bellshill station is the latest in CNG Fuels’ UK-wide strategic network of refuelling stations which already puts most of the UK within a 300-mile round trip of a refuelling site. Seven stations are already operational with plans to open up to 14 more by 2023, including the world’s largest in Avonmouth near Bristol, by the end of 2022.

The opening of the new station comes just weeks after the company announced plans to host hydrogen fuel trials across its expanding UK-wide network to ensure its stations are ready to support a multiple fuel future as different technologies develop and become commercially viable. The first hydrogen trials are due to begin next year and by 2025, CNG Fuels plans to allocate 100 acres of its land to public access hydrogen refuelling.