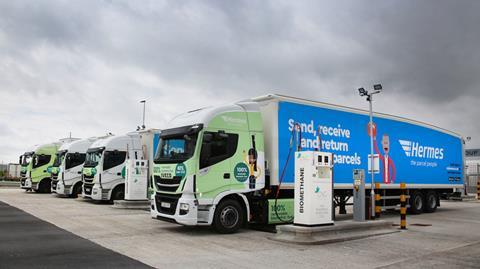 The station, near Glasgow, will be capable of refuelling up to 450 lorries a day when it opens in November, enabling HGVs to make low-carbon deliveries across most of Scotland. Most of England and Wales is already within a 300-mile round trip of a biomethane refuelling station and the new facility will put Inverness and Aberdeen within range.

Warburtons, the UK’s largest bakery brand, is the latest major name to announce it is adopting biomethane, following companies such as Hermes, John Lewis, Waitrose and Asda

Philip Fjeld, CEO of CNG Fuels, said: “Fleet operators keen to cut carbon and save money are switching to biomethane in droves, and our first station in Scotland will play a vital part in our network, allowing gas trucks to make deliveries throughout Britain. Biomethane can play a key role in helping the country meet its net zero targets and it is fitting that the station will open just as Glasgow hosts the UN Climate Summit.”

The new station, at the Eurocentral industrial estate off the M8 near Bellshill, is due to open in November. CNG Fuels customers with depots on or close to the estate include Warburtons and parcel delivery company Hermes, which already runs 90 gas trucks.

Steven Gray, Warburtons national transport manager, said: “After extensive alternative-fuel vehicle trials, Warburtons has chosen CNG technology, and specifically biomethane fuel, as our preferred strategy to decarbonise our primary HGV fleet. CNG Fuels’ progressive Bio-CNG Station roll-out plans across the UK will allow us to begin our decarbonisation strategy and the Eurocentral refuelling facility is a key location for our fleet.”

David Landy, head of fleet at Hermes, said: “As one of the UK’s largest CNG vehicle operators, the announcement of a Bio-CNG Station in Scotland is welcome news for Hermes. This will allow us to run our Scottish-based fleet on 100% renewable biomethane fuel and push the range of our existing CNG-powered HGV fleet, so vehicles can travel between England and Scotland and take even more emissions off UK roads.”

CNG Fuels currently operates six refuelling stations in England and is building a strategic network on major routes. Eurocentral is the first of 14 further stations that are due to be built over the next two years with £80m of funding from a new partnership with Foresight Group, including two more in Scotland near Larkhall and Livingston.