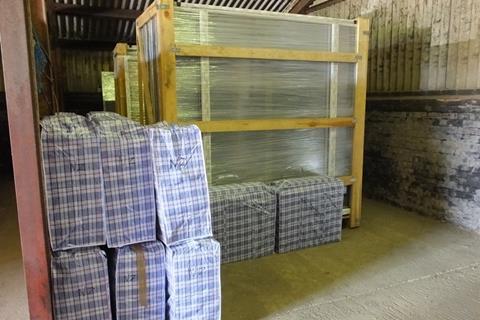 Smuggled cigarettes were concealed in window frames and laundry bags

The ringleader of a plot to smuggle millions of illegal cigarettes into the UK has been jailed – three years after he flew to Lithuania to avoid a HM Revenue and Customs (HMRC) investigation.

Svajunas Navagruckas, 51, who was one of HMRC’s most wanted tax fugitives, led an organised crime network that was caught with 8.5 million illegal cigarettes in June 2017.

He was arrested when HMRC investigators seized the cigarettes, worth £2.8m in evaded duty, at a farm in Lincoln.

Navagruckas left the UK while investigations were ongoing. He was charged in March 2019 with conspiracy to evade excise duty, and a European Arrest Warrant (EAW) was issued by HMRC. He was returned to the UK on 10 July 2020 after being arrested by Lithuanian authorities.

He is the fourth member of the gang to be returned to the UK and on Monday 10 August, Navagruckas appeared at Nottingham Crown Court where he pleaded guilty to excise duty evasion. He was sentenced to 28 months in prison on 5 February and confiscation proceedings are under way.

“These kinds of cigarettes come at a cost as they undermine legitimate traders, take vital revenue away from our public services and can all too easily find their way into the hands of children.

“We continue to pursue the remaining gang member Robertas Borovskis, 40. If anyone has information about his whereabouts, please report it online at GOV.UK.

“We also encourage anyone with information about the illegal sale of tobacco to report it online or call the Fraud Hotline on 0800 788 887.”

Three other men, Andrej Jerofejev, 38, Vilmantas Simaitis, 48, and Martynas Nazaras, 38, were previously jailed for their part in the plot. They had also fled to Lithuania but were arrested and extradited back to the UK by HMRC.

The tobacco haul, which was concealed in window frames and laundry bags, was discovered by HMRC investigators in a farm outbuilding in Lincoln on 15 June 2017.

Jerofejev and Nazaras were arrested as they removed the illegal cigarettes, which were hidden within several units of window frames. Simaitis was arrested at the same time at a nearby petrol station. All three men left the UK before appearing in court for fraudulently evading excise duty.

After the issue of European Arrest Warrants, Jerofejev was arrested in Lithuania in August 2019, Nazaras in December 2019 and Simaitis in January 2020. All three were extradited and all three pleaded guilty and were jailed for nearly five years.