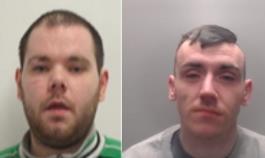 Two robbers who attacked a lone-female petrol station attendant, and left her fearing she could be blinded, have been jailed.

Callum Michael Grice and Alan Lawrence sprayed an unknown substance in the face of the victim as they raided the Esso petrol station, in Stockton Road, Seaham in the early hours of January 23, before making off with cigarettes, vapes, and around £200 cash.

Lawrence, 32, who took the lead role in the robbery, sprayed the shop worker in the face with the unknown liquid which caused instant burning and left her terrified she could be blinded.

Grice, 24, held a baton and stood in the doorway of the station during the incident before being instructed by Lawrence to steal a full display of vapes.

The pair made off but were quickly located in buses nearby by officers as their colleagues assisted the victim and secured the scene. Grice was found to be in possession of a stun gun disguised as a torch and an extendable baton.

An air weapon located close by was linked to Lawrence through DNA analysis and the pair were charged and remanded within 24 hours of their arrest.

Both men appeared at Durham Crown Court last week, via prison video link after pleading guilty to a string of offences alongside robbery.

Grice was sentenced to having an offensive weapon - a bottle containing ammonia - which he argued was hand sanitiser and possessing a prohibited weapon.

Lawrence, who had 44 previous convictions, was sentenced for possession of an imitation firearm.

Grice, of Margaret Street, Seaham, was jailed for 51 months, and Lawrence, of no fixed address, for 63 months.

Sergeant Victoria Ford-Stubbs, of Peterlee CID, said: “This was a terrifying ordeal for the victim and we commend her for her bravery throughout the investigation.

“We will always take robust action against criminals, especially those who put members of our communities and risk, and we are pleased that Lawrence and Grice have received a custodial sentence to reflect their offending behaviour.