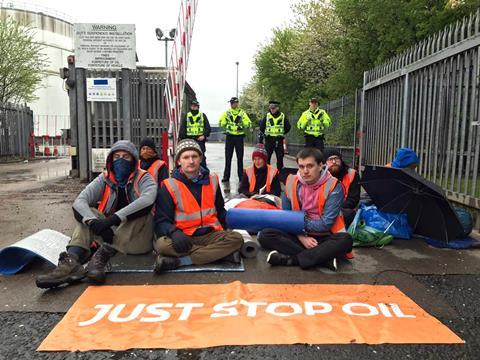 Supporters of Just Stop Oil have disrupted oil supplies from a key Scottish oil terminal in support of their demand that the UK government end new oil and gas projects in the UK.

At around 4am, up to 40 Just Stop oil supporters blockaded the entrance to the Nustar Clydebank oil terminal in Glasgow by climbing on top of tankers and locking on at the entrance. Others have entered into the oil terminal itself and have locked on at height to halt operations.

This is the first action in Scotland since the Just Stop Oil coalition began blocking the UK’s oil supply on April 1, which has resulted in over 1,200 arrests and numerous court appearances.

It follows last week’s protests at two motorway service areas on the M25 by around 35 supporters of Just Stop Oil who blocked access to the sites in support of their demand that the UK government end new oil and gas projects in the UK.

The action took place at the Extra Cobham Services in Surrey and the Roadchef Clacket Lane Services in Kent. At both locations, JustStop Oil supporters blocked the entrances to the petrol pump area by sitting in the road with banners. Some supporters also sabotaged the petrol pump by breaking the display glass and covering it with spray paint.

Fuel retailers had already been urged to review their security after government agencies warned of a strong likelihood that protesters may target forecourts.

Eilidh, 20, a supporter of Just Stop Oil from West Lothian said: “Sixty two per cent of Europe’s oil comes from the North Sea and Scotland doesn’t own a single drop of it. People in Scotland are currently suffering from fuel poverty whilst the billionaire oil CEO’s get richer and richer. Oil is already having and will continue to cause disastrous impacts for Scotland.”