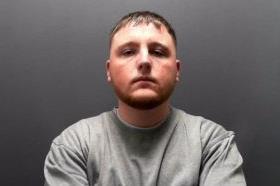 George Tunney was jailed for 11 years

A criminal who blew up ATMs on forecourts and caused more than £60,000 of damage just months after being released from prison has been jailed for a further 11 years.

George Tunney was sentenced at York Crown Court after targeting nine ATMs in an area spanning from Yorkshire to Leicestershire.

He was charged with conspiracy to cause explosions, conspiracy to burgle, theft and handling stolen goods following the offences committed in January and March 2020 which were all caught on CCTV and showed him using stolen vehicles.

Tunney began the offences in January 2020, targeting three ATMs on 6 January at Cantley Post Office near Doncaster, Barclays Bank at Lakeside, Doncaster, and Barclays Bank in Hessle, near Hull. The following day he struck at the Co-op on Dysart Road, Grantham, and the Post Office in Mansfield. Tunney was unsuccessful in accessing any cash but caused several thousands of pounds worth of damage to the premises.

On 10 January, Tunney targeted Spaceways Service Station in Nether Poppleton. He again caused thousands of pounds worth of damage and this time stole more than £57,000 in cash from the ATM.

In a second spate of attempted thefts in March, Tunney targeted the Post Office in Shepshed, Leicestershire, the Jet garage in Adwick, near Doncaster, and an ATM at the Co-op in Starbeck, near Harrogate. In one raid Tunney stole more £35,000 in cash.

Around 2am on 10 March, a few days after the second spate of attacks, North Yorkshire Police officers spotted one of the stolen vehicles near York. The vehicle took off at speed as officers followed it with the pursuit continuing for some distance. The vehicle then drove the wrong way round a roundabout before travelling along the wrong side of the A64 dual carriageway and shortly after was seen to crash into the car park barriers at the McArthur Glen York Designer Outlet.

The occupants fled but a police helicopter located the suspects hiding in a tree trunk and they were arrested.

Tunney plead guilty to all charges and was sentenced to 11 years in prison, and was banned from driving for eight years.

North Yorkshire Police detective superintendent, Fran Naughton, said: “The sentence given to Tunney today is a clear demonstration that this type of crime will not be tolerated. Not only did Tunney and his associates endanger many lives through the dangerous use of explosives, some of which were deployed at fuel forecourts, they caused well in excess of £60,000 damage to a number of businesses.

“These businesses provide essential local services to their communities and many were out of use for extended periods of time while repairs were made.

“This has been an extensive investigation, supported through SaferCash and the companies affected by these crimes with many lines of enquiry progressed to ensure these offenders face the consequences of their actions. I would like to thank everyone who played a role in securing a successful outcome for this case.”

In November 2020, a Norfolk man and a teenager from Doncaster were charged with conspiracy to cause explosions, conspiracy to commit burglaries and aggravated vehicle taking following their part in the March spate of attacks with Tunney.