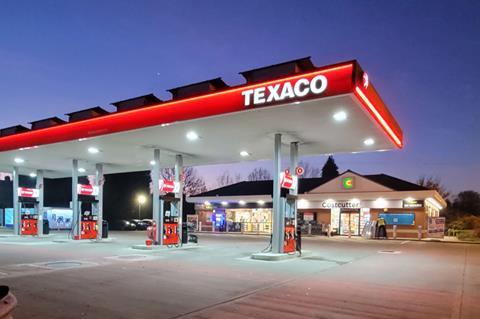 One of the group’s existing sites

Top 50 Indie TG Convenience Stores has won planning consent for the demolition of a derelict petrol station near Falkirk and development of roadside services including a McDonald’s restaurant and drive-thru.

A planning supporting statement produced for TG Convenience Stores by surveyors Graham & Sibbald explains that the site consists of the former filling station, where the sole remaining structure is the former retail kiosks, and undeveloped agricultural land to the north east, and totals about 0.85 hectares.

Viewforth Filling Station is believed to have been built on the site during the 1980s, but was forced to close when it was compulsorily purchased as part of road improvement works for the A879 and Higgins Neuk Roundabout, and has been derelict for about six years.

When the improvement works were completed the site was auctioned and was bought by the current owner in 2018.

Graham & Sibbald estimates that the new filling station, which would operate round the clock, would create 10 equivalent full-time jobs, and the McDonald’s restaurant will employ 65 full-time and part-time staff (45 full-time equivalent jobs).

The new facility will include a four-pump forecourt covered by a canopy, twin open jetwash units, two services bays for air / water and vacuums, two EV charging bays, customer parking and a new retail shop. A separate HGV refuelling area with HGV parking is located further to the south western corner of the development.