PIPELINE: UK and Europe fear for diesel supply without Russia 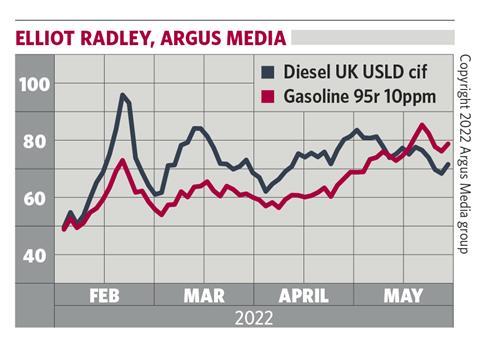 UK and European diesel importers face an ominous challenge to meet diesel demand as Russian supply gets frozen out of the market.

UK importers are already refusing to buy Russian diesel cargoes in the spot market, despite a lack of official legislation prohibiting it. The reason is reputational: Shell sparked a media furore by buying Russian crude oil in March. Now BP and Shell are both stipulating that none of the diesel they buy can have been refined in Russia. That position is becoming standard. It matters because Russia supplies around 40% of UK diesel imports, and the large majority of Europe’s share, totalling millions of tonnes per year.

Saudi Arabia, the UAE and India are the major alternative suppliers. But even if those countries more than double shipments to Europe, volumes could still fall short of substituting traditional Russian supply.

Many companies are stuck taking Russian diesel for the time being, whether they want to or not. They are legally locked into ‘term contracts’ to take deliveries.

So, there is a lot of Russian diesel that only a few people want, next to a much smaller pool of non-Russian diesel for everyone else.

That has created a substantial price differential between the two. Argus Media launched a price quote for guaranteed non-Russian diesel on March 28 and is assessing it at almost $70/t (almost 4.75p/l) more expensive than similar product with no such guarantee. That’s a difference of around 6%, which has been widening.

With supply so pressured, European diesel premiums to crude oil have hit all-time highs. Europe’s refineries are responding by trying to produce as much diesel as possible, but Europe is structurally short of the fuel and self-sufficiency is impossible.

One diesel trader in European markets commented in May: “We’re going to run out of diesel.”

The concern is widespread. The only relief currently is that demand is subdued by high retail prices. But demand will be back. At the moment, nobody can explain how it will be matched by supply.