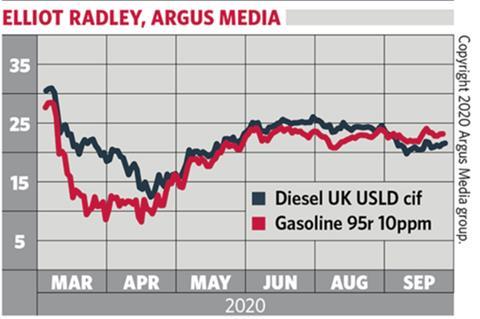 “The gentle recovery in European road fuel markets realised through the summer months has come under threat as a second-wave of Covid-19 grips the continent. The European refining industry is subsequently under intensifying pressure, while the northern hemisphere winter and associated slowdown in demand fast approaches.

While muted compared to previous years, road fuel markets saw a small uptick in the summer months, as Covid-related restrictions generally eased across Europe and some braved summer holidays internationally and domestically. But September has seen a resurgence in cases across Europe and a return of lockdown measures which will naturally impact demand for road fuels.

Diesel, which has been a life raft for refiners during much of the Covid crisis, has seen its profitability steadily eroded in recent months. Margins to benchmark North Sea Dated crude averaged just above $7/bl in July, slipped to $5.63/bl in August, but briefly touched 21-year lows of $2.20/bl in September. And this has happened at a time when refineries in Europe are operating at record low run rates of around 70pc.

There has subsequently been talk of peak oil and products demand in the industry. BP showed oil demand to have already peaked in two of its three energy outlook scenarios. The IEA said recently that the products overhang will last at least another two months, and could see refiners shift output away from road fuels where possible. And Total has just announced it will cease conventional refining at its Grandpuits refinery early next year, converting the site to a biorefinery.

Despite the gloom, gasoline has seen a pick up in profitability, helped by a fall in floating storage stocks and exports to the US and west Africa. Margins to crude averaged under $3/bl in July and August, but have breached levels of $7/bl in September. Though whether margins will hold as the market transitions to cheaper winter-grade blends and demand falls away remains to be seen.

On transitions, the UK’s move to further embrace renewable fuels on gasoline has taken a step forward this year, after the government proposed the introduction of E10 gasoline from 2021, having closed a consultation on the topic in May. E10 gasoline means it is blended with 10pc renewable bioethanol and the most common unfinished blendstock for the product is the so called Eurobob non-oxy gasoline.

Alongside the European industry benchmark price Argus Eurobob oxy gasoline barges, Argus is also since several years publishing Eurobob non-oxy for the E10 markets. With higher renewable energy targets planned to sweep across European states from next year in the form of the RED II directive, the future is highly likely to heavily feature E10 and the non-oxy gasoline blend, as countries strive to meet their targets in whatever way they can.

Also for diesel, renewable diesel in the form of hydrotreated vegetable oil (HV) is gaining in popularity in UK as to also help meet the RTFO targets. Argus have been covering the HVO market for almost a year and now also publishing regular price assessments. For more information on HVO, E10 gasoline or any other prices for transport fuels, most welcome to contact us at Argus.”