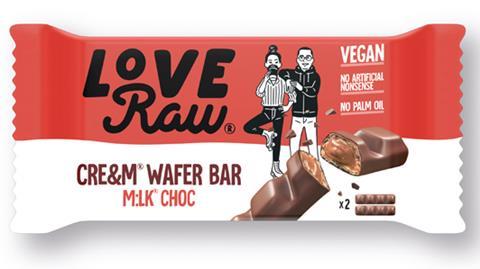 Vegan chocolate brand LoveRaw has introduced a white chocolate version of its vegan treat, the Cre&m Wafer Bar, and is has plans for a third flavour to follow shortly.

Much like its predecessor, the 100% vegan White Cre&m Wafer Bar is made from LoveRaw’s own branded white chocolate and contains no artificial additives, palm oil or dairy.

A third flavour is due to launch shortly with details to be announced soon.

Rimi Thapar, co-founder and CEO of LoveRaw, explained: “As the world’s first mainstream vegan alternative to the popular hazelnut cream filled chocolate wafer bar, our original Cre&m Wafer Bar has performed exceptionally well in the six months since it launched, making it our most successful product line to date.

“We’ve been so taken aback by the reaction to not only the Cre&m Wafer Bar but our entire product range. To think that LoveRaw as we know it today was essentially built on the success of our delicious Butter Cups that launched over two years ago is crazy, and we couldn’t be more grateful for all the support we’ve received since then.

“Continuing with NPD throughout a global pandemic has come with its own set of challenges, however, we have managed to adapt and overcome any hurdles in order to move forward with our plans for rapid business growth, with 2021 forecast to be another epic year for LoveRaw.”

Manav Thapar, managing director of LoveRaw, added: “Having effectively emulated a leading confectionery favourite with our original Cre&m Wafer Bar, we wanted to take this even further and give our customers a new product to get excited about during a time when everything else is so uncertain.

“With more people buying online than ever before and sales from our e-commerce store up by 2005%, we made the decision to launch the White Cre&m Wafer Bar online initially, closely followed by in-store across a number of retailers.”