£7,500 worth of tobacco stolen from Welsh forecourt after gang smash their way in 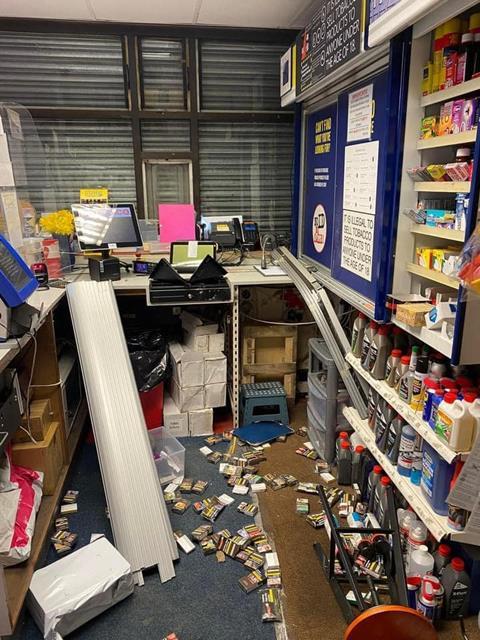 Video footage of four men who smashed their way into a petrol station shop and filled bags with piles of tobacco products, has been captured on CCTV (see below).

The break-in at James & Jenkins Garages in Cardiff’s Llandaff North happened at 4.20am on 2 March, with the thieves then fleeing the scene.

Mark James told Forecourt Trader: “On Wednesday early morning, about 4.20, four men in their early 20s I suppose, wearing hoods took some materials off the building site next door because we’re doing some works to the showroom, then levered or ripped up the shutters. Maybe we should have had a padlock on the bottom of the shutters but how far do you go that’s the sort of thing you start to ask yourself. So they ripped up the shutters put the window through with one of the concrete blocks they had taken off the site, realised that they’d come up against the back of a steel cabinet. So they then put another hole through another part of the window.

“Two of them entered the shop, but I think they came in looking for cash first, because the first thing they did was go through the drawers, and then they went and had a go with the till. Well, nobody leaves money in the till anymore so there was nothing in there. Probably, we should have left the till drawer open, I suppose would be a lesson to learn. Because that till drawer was three weeks old, and they butchered it to bits.

“But then they obviously turn their attention to the cigarettes, ripped the shutter off the cigarette cabinet and picked up a mailbag and filled it with the contents of the whole gantry basically.”

Mark said the men were in the shop for less than four minutes and made a quick getaway. Neighbours heard the shop’s alarm go off and called the police, who were at the scene within eight minutes.

“One of the robbers wasn’t wearing gloves, so the police could get some prints, and one of them cut themselves coming through the glass, so they’ve also got potential DNA,” he said.

He added that although the shop has experienced it’s fair share of break-ins, they haven’t had one for about five years and the staff were shaken, though no one was present so couldn’t be hurt.

“The first I heard of it was the member of staff coming to open up a quarter to seven. And obviously at that point, all the mess was there. So the police advised us not to open because they wanted preserve the scene.

“We were unable to open until about three o’clock in the afternoon on the Wednesday,” continued Mark. “Because of the damage to the till drawer, which is connected to the EPOS, so we couldn’t really do a lot. It was very frustrating, because customers are coming in and we’re not able to look after them.

“I think our members of staff, you know, they look at the level of destruction that was caused by people in this space of two, three or four minutes. And I think it makes them a bit a bit uneasy when they’re working an evening shift.”

The total amount Mark is claiming back on insurance is approximately £12,000; with £2,600 of that being on glass replacement for the windows and £7,500 being for the tobacco loss.

“I think I’d say to anyone to review your insurance cover on your cigarettes, because I think we’re probably marginal on the level of cover we’ve got, because it’s not just cigarettes anymore is it? You’re talking, you know, all the vapes and everything. I know we’ve got a level of cover, but it’s probably close to whether we had enough cover.”

South Wales Police issued the following statement in connection with the incident:

South Wales Police was called at around 4.30am on Wednesday March 2, following reports of a commercial burglary at the Texaco garage on Station Road, Llandaff North.

The incident is currently under investigation.

Anyone with any information is asked to contact us by one of the following means quoting 2200070117.

Go to: https://bit.ly/SWPProvideInfo Send us a private message on Facebook/Twitter Via email: SWP101@south-wales.police.uk Phone: 101