This Autumn was memorable for the wrong reasons for forecourt operators and the nation was gripped by panic buying at the pumps, Gordon Balmer the PRA’s executive director looks back over the past few weeks. 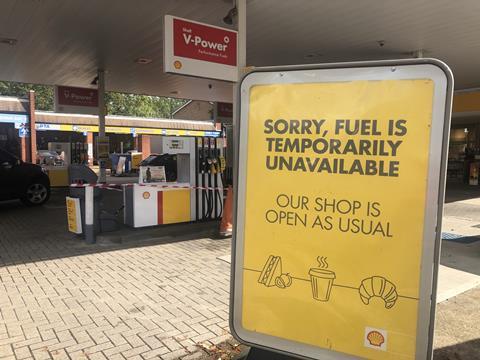 On September 22 the ITN News business and economics editor Joel Hills reported that he had obtained “exclusive” access to leaked notes from a recent Cabinet office meeting.

The meeting was called to discuss supply chain issues associated with the nationwide shortage of lorry drivers and the consequent impact.

Leaked comments which were attributed to Hanna Hoffer BP VP Operations and Dealers, suggested that the company’s ability to transport fuel from refineries to its network of forecourts was faltering. Hofer said it was important the Government understood the “urgency of the situation”, which she described as “bad, very bad”. According to the report, Ms Hofer also said BP had “two-thirds of normal forecourt stock levels required for smooth operations” and the level is “declining rapidly”.

This was a contributory factor in influencing motorists to flock to the pumps to fill up, some regardless of whether they needed fuel or not. To put the surge in demand into context, the average stock holding at a forecourt at any one time is around 40% and industry sources suggest that this fell to 16% by Friday, September 24,and by the weekend many sites were completely dry.

The PRA’s press office was immediately inundated with TV and radio interview requests for our comments on the situation. Brian Madderson, Steve Coombe and myself worked flat out to explain the situation. We thought it was important to get our members’ site status into the public domain, so we refused very few interviews. In total, we estimate well over 100 media appearances were completed many starting early in the morning and going through to the evening.

Thanks to the sterling efforts of PRA members across mainland UK, the PRA was able to sample more than 1,200 (approx 25%) independent sites on a daily basis, the results of which helped to balance the Government’s more optimistic reporting. The Department for Business, Energy and Industrial Strategy’s (BEIS) own figures, were skewed towards supermarket and oil company sites.

“Our poll result issued each lunchtime was eagerly sought by media outlets not just in the UK but in Europe and across the globe,” said Madderson thus adding to the stature of the PRA.

According to figures compiled on a daily basis by the PRA in the week of October 4, the crisis was persisting in London and the South East. While all other regions of the country were returning to normal, independents in the region often reported being dry for days on end. We also had reports from several members that the oil companies were prioritising their own sites, and if correct, this certainly exacerbated the crisis for independents,” said Madderson.

We also pointed out in our press statements that supply priority should have considered the marked decrease in forecourts around the densely populated London and South East region. In London there are now only 548 filling stations so 1 per 27,000 people, which compares to 1 per 6,000 in the rest of the UK.

The PRA would now like to see an independent inquiry established, to determine what worked and what did not over the course of this crisis. BEIS spokespersons talking of bringing out the reserve tanker fleet (which they had purchased some years earlier for just such a crisis) should have been backed up with action. However, it turned out that most tankers were not fit for purpose, seemingly purchased by civil servants without industry guidance.

The decision to bring in military drivers was too late to make a significant difference, especially as the military’s own tankers were not to be used, providing no additional tanker capacity.

The late decision to encourage European HGV tanker drivers to help out, through a special temporary visa scheme was offered to December 31 and then extended to March 31, 2022, produced very few applicants. None of these emergency levers could assuage the problem in the very short term so more and more independent retailers ran dry of stock and had to close.

A crisis such as this brings into sharp focus the necessity to be part of your trade association as we are able to represent you at all levels of Government, the media and provide the help and advice you need.