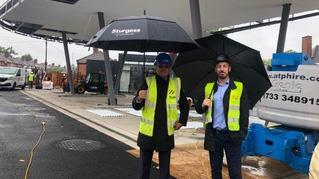 Construction of a new leading-edge forecourt in Leicester by Hockenhull Garages is back underway following a three- month break due to the pandemic.

The circa £2m project in Wigston is taking a very distinctive shape on a huge corner plot replacing a run-down and unsightly former garage development and hand car wash.

With its huge pear-shaped canopy, spacious forecourt and 300sq m building - which will encompass a convenience store, barista coffee bar, seating area and ‘healthy’ all-day food offer - as well as its ‘green’ attributes, it promises to stand out among today’s modern forecourt developments.

“There was a need for such a development on this particular road, but the planning was unbelievable in terms of objections from other parties, including a local forecourt,” explained chairman Peter Hockenhull, who acquired the site in 2018 after protracted negotiations, having seen the potential in a location with such extensive frontage in both directions from the main road.

Now, he says all the neighbours are really pleased with what’s emerging as they look forward to enjoying the new facilities being created. He visualises it being a destination in itself - the place to come if you were meeting a friend for coffee; or to come and sit in pleasant surroundings and enjoy the variety of food and drink choices or convenience offers while you wait for your car to charge.

“This is going to be called ‘The Stage’ – a name of local relevance. We will have three big signs right across the front: Welcome; To; The Stage,” said Peter, who is working with managing director son Joe to get the project completed in time for new opening date of July 24 – having been put back from April 16.

It will also be hard for anyone to miss the rather stunning canopy/stanchion development.

“We wanted to do something different with the canopy,” said Peter. “Most petrol station canopies are square, but I wanted the canopy to be a feature to catch people’s eye, which it will be just because of the shape. I also wanted the very big statement stanchions.”

The spacious forecourt, which will be Shell branded - will also feature car washing, EV charging and 14 parking spaces.

But having been turned down by Costa and Starbucks for the barista bar because they wanted it housed in a separate building, Peter and Joe were forced to look for something different. They decided to work with Insomnia Coffee Company where staff recommended they visit Ireland – which they did on three occasions. During their travels they came across the Freshly Chopped offer which aims to bring a ‘fresh, clean and nutritious food, served quickly’.

“It was a big decision to go for Freshly Chopped rather than Subway, but we believe in the concept – and we’re also trying to do something different,” said Joe. “They have a great menu, which can cover all times of day – breakfast, salads, hot food, omelettes – as well smoothies and protein pancakes.

“The market is changing and especially where Uber and Deliveroo are concerned, we may be going until 8pm with food, because people want something delivered. People are sitting at home, watching a film – it may be raining outside - and they pick the phone up and order pizza; or Ben & Jerry’s for £5 a tub, instead of walking to the store, even though it may be