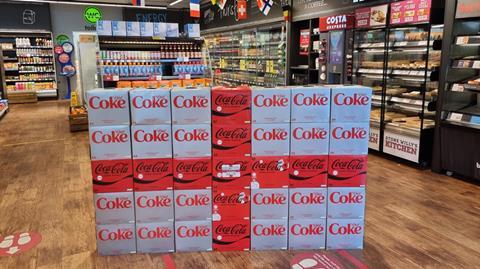 Excitement has been rising in forecourt stores ahead of the England football team’s clash with Italy in the Euro 2020 final at Wembley on Sunday.

Sewell on the go’s Hull West Team have showed their support for the team with an eye-catching display of Coca-Cola depicting the England flag.

Meanwhile, after England’s semi-final triumph, EG Group Tweeted: “Anyone else been humming, ‘Sweet Caroline’ or ‘It’s Coming Home’ for most of the day? If you haven’t you will be now!”

At MFG, if England win on Sunday, Sunny – a purchase ledger supervisor at MFG’s head office – will be dying his hair blonde. He would like to raise as much money as he can for Macmillan Cancer Support in the process. You can support Sunny by donating to Macmillan at http://bit.ly/3dWX83Q

Nisa Retail has also been getting behind its members. It tweeted: “Our independent partners are making the most of the opportunities the #Euro2020 tournament has to offer with some great deals of beers and ciders to help shoppers enjoy the final this weekend.”

And it followed up with: “It’s going to be a huge weekend for football and our partners have got everything they need to ensure their shoppers have the perfect match. Lots of sales opportunities to be had from #Euro2020.”

And after the sales have reached their peak and everyone is glued to a screen to watch the match, many retailers are closing to allow their staff to also see the game.

Spar retailer Lawrence Hunt tweeted: “To enable all our store teams to watch England in the Euro finals this Sunday, we will be closing all our stores at 8pm – come on England.”