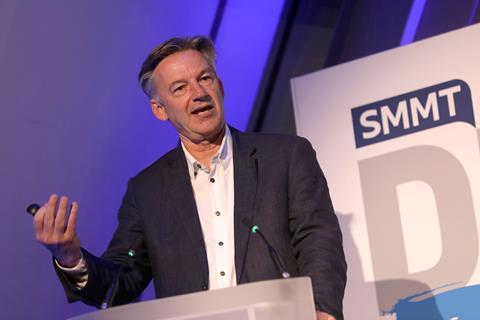 The UK new car market declined by 35.5% in February as 28,282 fewer units were registered during a traditionally weak month for new vehicle uptake, according to figures published today by the Society of Motor Manufacturers and Traders (SMMT).

The industry recorded its lowest February uptake since 1959, with 51,312 new cars registered.

With showrooms closed nationwide since January 5 – and in many parts of the country, since December – both private and fleet sector demand fell, by 37.3% and 33.5% respectively. All vehicle segments saw declines save for luxury saloons, which recorded a 3.8% increase against a statistically very small proportion of the market.

Plug-in vehicles continued to enjoy growth, with battery electric vehicles (BEVs) and plug-in hybrid electric vehicles (PHEVs) taking a combined 13% market share for the month, up from just 5.7% in February 2020. BEV uptake increased by 40.2% to 3,516, and PHEVs by 52.1% to 3,131 as the industry continues to promote a broad range of lower-emission technologies for consumers. 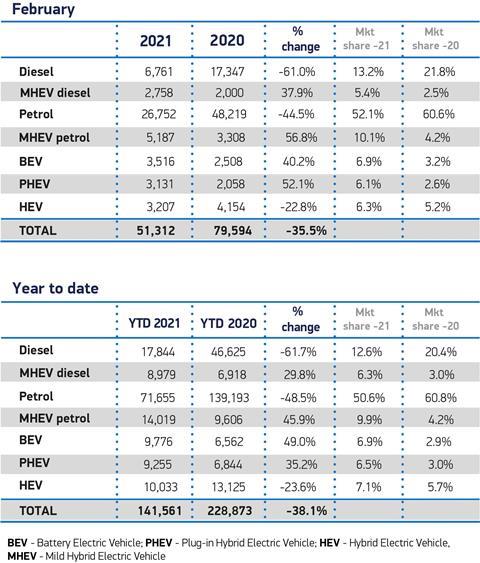 However, increasing uptake of these new technologies to the levels required by 2030 remains a mammoth task, according to the SMMT, with yesterday’s Budget proving a missed opportunity given the lack of measures to support the market overall and notably the transition away from pure petrol and diesel cars and vans.

However, it believes the Chancellor answered the industry’s call for a furlough extension, vital given the massive fall in vehicle demand. With the country facing ongoing restrictions until at least 12 April, the automotive industry expects a challenging March, traditionally the sector’s most important month which would typically account for one in five annual registrations.

SMMT has revised its market outlook to 1.83 million new car registrations in 2021, down from the 1.89 million predicted in January. Most of these losses are expected to occur in March.

Mike Hawes, SMMT chief executive, said: “February is traditionally a small month for car registrations and with showrooms closed for the duration, the decline is deeply disappointing but expected. More concerning, however, is that these closures have stifled dealers’ preparations for March with the expectation that this will now be a third successive dismal ‘new plate month’. Although we have a pathway out of restrictions with rapid vaccine rollout, and proven experience in operating click and collect, it is essential that showrooms reopen as soon as possible so the industry can start to build back better, and recover the £23 billion loss from the past year.”

Jon Lawes, managing director of Hitachi Capital Vehicle Solutions, which works in partnership with Gridserve, developer of the first Electric Forecourt in Braintree, commented: “With the nation set to emerge from lockdown over the coming weeks, the automotive industry can start to look forward to a strong recovery in the second quarter of 2021. However, the decision to keep showrooms and dealerships closed until at least April 12 will mean businesses will miss out on the first new number plate issue of the year – a traditionally busy period for the sector. Dealerships and manufacturers must continue to look ahead: we expect to see a spike in demand as consumers regain financial and social confidence as we journey down the road to recovery.

“Despite the challenges faced by the industry, it’s great to see that electric vehicle registration continues to rise, and is up almost 50% year-on-year. The recent pledges from Ford and Jaguar Land Rover to go all electric in the coming years is a further positive step towards mass EV adoption. As the 2030 ICE ban approaches, we need ongoing support from manufacturers to encourage developments in charging infrastructure and support consumers and businesses in making the switch to green vehicles.”