While it may not be a common sight on forecourts today, the transition to hydrogen powered vehicles, particularly HGVs and commercial fleets, is happening more quickly than expected. Kenny Scott from TSG UK Solutions, explores the potential of hydrogen as a zero-emission fuel, addressing some of the common concerns regarding its viability, sustainability and most importantly, its safety. 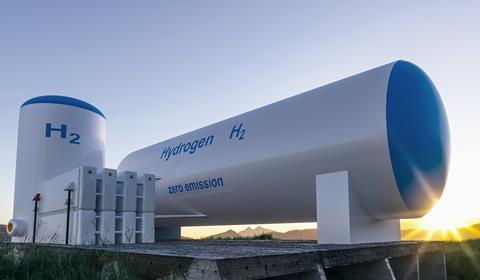 In recent times, the attention of leaders from almost every country across the globe has been focused on the rising fear of climate change and its devastating effect on the environment and the livelihoods of many generations to come.

One way in which we can all play our part in halting climate change is to alter the way we travel by moving to vehicles powered by greener energy alternatives such as electricity, liquefied natural gas (LNG), compressed natural gas (CNG) and hydrogen.

As these alternative markets develop, the face of the forecourt is changing to accommodate the growing number of ultra-low emission vehicles (ULEZ). Electric vehicle (EV) charging points are now a common sight at forecourts across the UK, but fuel cell electric vehicles (FCEV) are a relatively new addition to UK roads and hydrogen fuelling infrastructure is few and far between.

For hard-to-abate sectors, such as heavy transport, however, hydrogen will play a key role in the decarbonisation process, driven by the production of ‘green’ hydrogen, government investment and the development of innovative hydrogen fuel cell electric HGVs by key players such as Mercedes, Volvo and Daimler.

The UK Hydrogen Strategy, published in October 2021, sets out plans to use hydrogen to provide clean energy to some of our most polluting and energy intensive sectors, including transport, industry and heating. With a number of production facilities under development, the cost of ‘green’ hydrogen could fall below that of diesel as early as 2023.

As hydrogen fuel cell vehicles are driven by an electric motor, they are classified as EVs, however there is one crucial difference between hydrogen FCEVs and pure EVs – hydrogen vehicles are self-sufficient in the production of electricity.

In fully electric or plug-in hybrid models, the vehicle gets its power from a built-in battery charged from an external source. In hydrogen powered vehicles, the powering up of the battery happens on-board as hydrogen (liquid or gas) is passed through a fuel cell where it is converted into electricity and stored in the vehicle’s battery.

This has several key benefits for long-distance haulage and commercial fleets – more milage, quicker refuelling, less downtime and better return on investment (ROI). If an HGV requires a £350,000 upfront investment, they need to be operational 24/7 to maximise ROI – stopping for 8 hours to plug in and recharge is not a viable option.

By contrast, the operation of hydrogen FCEVs is more comparable to traditional diesel-powered vehicles, with 10-15 minutes of filling time giving 400 – 600 km. On the continent, trials of liquid hydrogen-powered HGVs have begun and the results so far have been very promising. Thanks to the higher energy density of hydrogen liquid, the vehicle’s performance was virtually equal to that of a comparable conventional diesel truck, clocking up close to 1,000 km.

To many, hydrogen is an unknown quantity; it is often referred to as an energy source of the future. However, large-scale and low-emission hydrogen production is already underway using a very natural resource - water.

Electrical energy is used to break down water into its constituent elements, hydrogen and oxygen, via the process of electrolysis. If the electricity used in hydrogen production comes from renewable energy sources, such as offshore wind or solar energy, it would have a neutral carbon footprint which is great news for the environment.

There are major challenges to overcome. Green hydrogen is very expensive to produce but as it becomes more appealing to a variety of industries – from domestic heating and transport to aviation and steel production – the process will become more efficient and less costly.

To evaluate the safety of hydrogen fuel, it must be compared with its counterparts on our roads today – petrol and diesel. Unlike conventional fuels, hydrogen is not toxic and therefore a spillage will not contaminate the habitat or generate harmful air pollutants. Hydrogen is 14 times lighter than air and in the unlikely event that a leak was to occur, it would disperse rapidly, greatly reducing the risk of ignition.

Furthermore, hydrogen FCEVs are put through stringent safety tests and the onboard carbon fibre tanks are designed to withstand extreme pressure, meaning there is no greater danger than with any other vehicle. In the event of an accident, the hydrogen system shuts down automatically to minimise risk to the driver and passengers.

For many forecourts, hydrogen is still something for the future, but the transition is happening much more quickly than anyone in the industry predicted. Recently, BP and Daimler Truck AG announced plans to roll-out hydrogen infrastructure which will see 25 local access ‘green’ hydrogen fuelling stations across the UK by 2030, a key step in the decarbonisation of the long-distance transport sector.

We’ve also seen investment from local authorities in recent years, with hydrogen powered bus fleets in London, Birmingham and Aberdeen contributing to lower carbon emissions and cleaner air. The Metropolitan Police has a fleet of Toyota Mirai hydrogen FCEVs – one of only two models available in the UK, along with the Hyundai Nexo – which are deployed on operational duties near to existing hydrogen fuelling points in London.

Hydrogen fuelling stations are under development outside of London, bringing the total number of planned and opened stations to 14 across the UK. Wider deployment is something of a ‘chicken and egg’ situation, with stations requiring relatively large volumes of vehicles to make them cost-effective. Opening local authority hydrogen fuelling infrastructure up to the public will help to encourage other businesses to develop their fleets and provide anchor points for commercial vehicles.

Fuelling the next generation

With the powers of government pushing towards hydrogen innovation and major truck manufacturers bypassing pure electric in favour of FCEVs, there is a certain confidence in the potential of hydrogen and the growth of the sector. Here at TSG UK, we are taking steps to ensure we have the infrastructure in place to supply, install and maintain hydrogen pumps. We will be ready to take the next critical step to kickstart the energy transition and safeguard our world – will you?