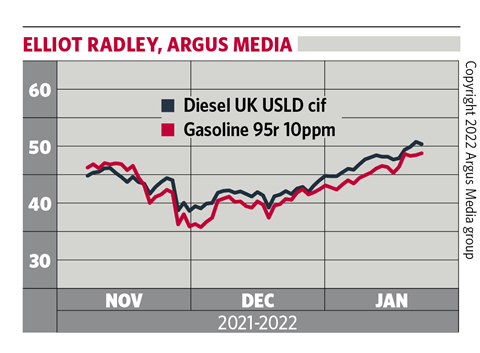 The European refined products market has entered the new year in a much stronger position than last, as markets begin to return to some normality in 2022 and ‘endemic’ has rapidly become the phrase du jour.

Demand for diesel and gasoline in Europe had been steadily recovering in the final months of last year, before the Omicron variant of Covid-19 burst on to the scene. But government responses around Europe were more muted than during previous waves of the virus, and while demand may have taken something of a dip, the trajectory upwards mostly continued, with demand in the UK remaining robust through December.

Any restrictions that were put in place during the most recent wave have now started to be rolled back, experts are beginning to talk of the virus being endemic, and airlines and aviation industry bodies have increased calls to do away with testing for travel and free up markets even further. This will be bolstering demand for transport fuels, though given winter marks a seasonal low point, the real gains are likely to come nearer the spring.

Still, fuel prices have risen sharply, mainly driven by a recovery in crude values to record levels in recent weeks. Ice Brent topped $90/bl in late January for the first time since 2014 amid a slower than expected ramp up in Opec+ supplies and a rise in geopolitical tensions, namely Putin at the Ukrainian border.

Any conflict that does emerge would likely only serve to lift fuel prices in Europe, with the diesel market certainly in the spotlight given Russian supplies account for 50-60% of Europe’s monthly seaborne imports. But refined products across the barrel could be impacted given European refiners’ appetite for processing Russian Urals crude.