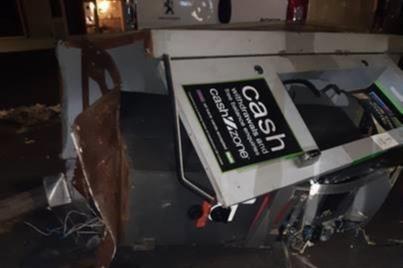 Thieves who tried to steal a cash machine from a petrol forecourt fled empty-handed and abandoned the battered device in the middle of a road, following an intervention by a member of the public.

Police were called to the petrol station in Attenborough Lane, Attenborough, Nottinghamshire, shortly after 2am on Saturday September 4 when the attempted theft was spotted and police alerted.

Aware that officers would soon be on their way, the thieves fled from the scene in a waiting getaway car – leaving the battered, but unopened, cash machine in the middle of the road.

A van, stolen hours earlier from an address in Chilwell, was also left abandoned at the scene. It will be investigated before being returned to its owner.

Detective sergeant Gary Hewson from Nottinghamshire Police said: “This was a brazen attempt to steal a significant amount of cash in the dead of night.

“We believe that the stolen van was used to drag the machine a short distance before the people involved were disturbed and fled the scene.

“Investigations are ongoing at the scene and we would like to speak to anyone who may have additional information about what happened.”

Anyone with any additional information is asked to call 101 quoting incident 75 of September, or they can call Crimestoppers anonymously on 0800 555111.