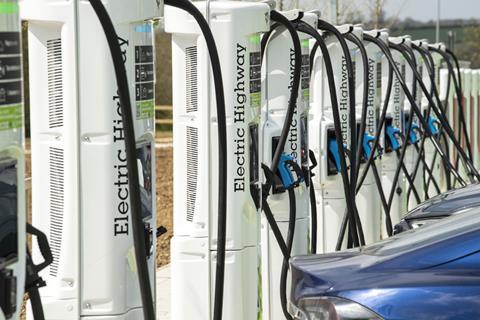 The Competition and Markets Authority (CMA) has launched an investigation into suspected breaches of competition law in respect of the supply of electric vehicle chargepoints at motorway service areas.

The announcement came as it published the findings of its market study into electric vehicle (EV) charging.

“The CMA is concerned that these arrangements make it difficult for other operators to provide competing chargepoints at motorway service stations. This could result in drivers losing out on the benefits of competition such as greater provision, more choice, competitive prices and reliable, high-quality chargepoints.”

In a statement, Gridserve responded: “Gridserve’s purpose is to deliver sustainable energy and move the needle on climate change. We acquired the Electric Highway network less than two months ago to accelerate decarbonisation in-line with net zero targets and provide the best possible consumer experience to make driving an electric vehicle as attractive as possible to everyone.

“We have already made incredible progress upgrading the original Electric Highway network. This has included replacing chargers in over 70 locations in less than eight weeks with new technology, contactless payment, reliable charging with 24x7 customer support, and introducing a Customer Charter – all while retaining highly competitive prices.

“Our focus is to find a path forward that addresses the concerns raised by the CMA, enabling us to retain momentum and continue to swiftly deliver the net zero charging infrastructure plans and investment we have worked so hard to put in place, that support the successful uptake and transition to electric vehicles, in-line with the government’s clearly stated objectives.”

The company also emphasised that its chargers delivered against all the major principles recommended in the CMA’s market study.

Roadchef and Moto both said they were co-operating fully with the inquiry, but they were unable to comment further while the matter was still under investigation.”

The CMA’s market study set out measures to ensure a national network of electric vehicle chargepoints is in place ahead of the 2030 ban on the sale of new petrol and diesel cars.

As part of its study it examined whether the industry can deliver a comprehensive UK charging network that works competitively and that people can trust.

It found that while some parts of this new sector are developing relatively well – including charging at locations such as shopping centres, workplaces and people’s private parking (garages and driveways) – other parts are facing problems which will hinder roll-out.

In addition to its concerns about choice and availability of chargepoints at motorway service stations, it said the roll-out of on-street charging by local authorities (which many drivers will rely on) is too slow; and rural areas risk being left behind with too few chargepoints due to lack of investment.

In addition, it reported that charging can sometimes be difficult and frustrating for drivers, which could stop people switching to EVs. Concerns about the reliability of chargepoints, difficulties in comparing prices and paying for charging, risk reducing people’s confidence and trust.

It said charging should be as simple as filling up with petrol or diesel, and set out four principles to ensure this:

2. Charging must be simple and quick to pay for, so people don’t need to sign up and contactless payments are widely available;

3. The cost of charging must be clear with a standard way of pricing, such as per kilowatt of energy;

4. Charging must be accessible so all chargepoints can be used by any type of EV.

The CMA also made a number of recommendations to the Government:

Andrea Coscelli, chief executive of the CMA, said: “Electric vehicles play a critical role in meeting Net Zero but the challenges with creating an entirely new charging network should not be underestimated. Some areas of the roll-out are going well and the UK’s network is growing – but it’s clear that other parts, like charging at motorway service stations and on-street, have much bigger hurdles to overcome.

“There needs to be action now to address the postcode lottery in electric vehicle charging as we approach the ban on sales of new petrol and diesel cars by 2030. Our recommendations will promote strong competition, encourage more investment, and build people’s trust, both now and in the future.”