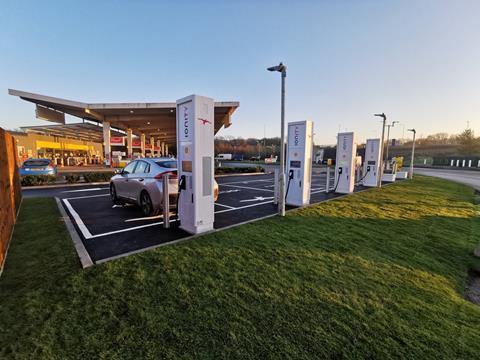 Britain’s ratio of plug-in vehicles on the road to standard public chargers (16:1) was one of the worst among the top 10 global EV markets at the end of 2020, according to SMMT analysis

Swift action and binding public charger targets are needed so that everyone can be part of the electric vehicle revolution, is being called for by Mike Hawes, chief executive of the Society of Motor Manufacturers and Traders (SMMT), which has just released the latest vehicles sales data.

New car registrations grew 1.7% in November, bringing an end to four months of consecutive decline, with 115,706 units registered compared to the same period last year. However, viewed in the context of a weak 2020, when lockdowns impacted registrations, and compared to the pre-pandemic average, the market remains down significantly, with 31.3% fewer vehicles registered during the month.

Plug-in vehicle demand continued to grow, however, with battery electric vehicles (BEVs) equating to 18.8% of the market, with 21,726 units - more than double compared with November 2020 – while plug-in hybrid vehicles’ (PHEVs) share grew to 9.3% or 10,796 units

Year-to-date, 1,538,585 new cars have been registered, of which 17.5% have been BEVs or PHEVs, meaning one in six new cars is capable of being plugged in. When combined with hybrid electric vehicles (9% share), the SMMT points out that more than a quarter (26.5%) of the new car market during 2021 has been electrified.

However, despite this uptake in demand for plug-in vehicles, SMMT analysis has revealed that the pace of on-street public charging infrastructure rollout is lagging, with the number of plug-in cars potentially sharing a public on-street charger deteriorating from 11 to 16 between 2019 and 2020 and just one standard on-street public charger installed for every 52 new plug-in cars registered over the course of this year.

SMMT says that Britain’s ratio of plug-in vehicles on the road to standard public chargers (16:1) was one of the worst among the top 10 global EV markets at the end of 2020. With plug-in vehicle uptake having grown by 86.6% in 2021, SMMT is calling on the government to take action to avoid the ratio deteriorating further, by boosting the provision of public charging points through the imposition of binding targets.

Private demand over the course of the month saw an increase of 41.7%, taking the private market share to an unusual high of 54.1%, although the growth reflects the impact that the November 2020 lockdown had on consumer purchases, as well as the supply-constrained nature of the current market as the shortage of semi-conductors undermines both production and registrations of new vehicles. The number of new cars registered to large fleets declined by a quarter (24.7%).

Mini and specialist sports vehicle segments both saw significant increases of 139.9% and 66.8% respectively, despite representing relatively low-volume segments and therefore subject to volatility. The most popular categories, remain the lower medium (28.8%), supermini (28.6%) and dual purpose (27.5%) segments.

Mike Hawes, SMMT chief executive, said: “What looks like a positive performance belies the underlying weakness of the market. Demand is there, with a slew of new, increasingly electrified, models launched but the global shortage of semiconductors continues to bedevil production and therefore new car registrations.

”The industry is working flat out to overcome these issues and fulfil orders, but disruption is likely to last into next year, compounding the need for customers to place orders early. The continued acceleration of electrified vehicle registrations is good for the industry, the consumer and the environment but, with the pace of public charging infrastructure struggling to keep up, we need swift action and binding public charger targets so that everyone can be part of the electric vehicle revolution, irrespective of where they live.” 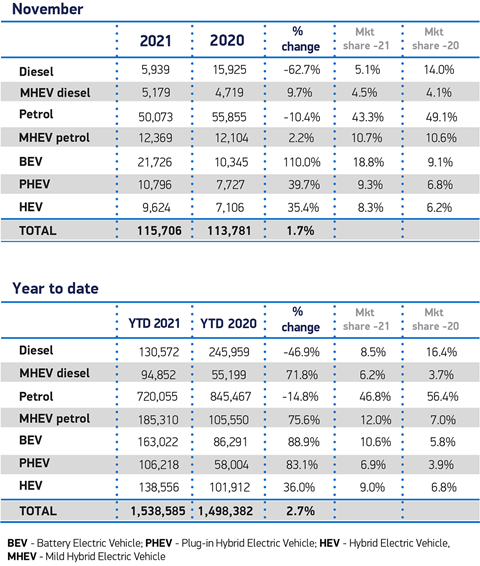