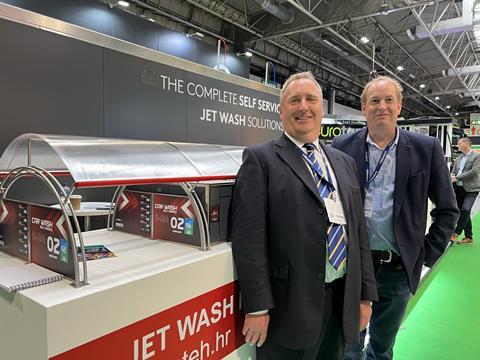 A flexible car-wash centre format that could be one of the templates for forecourt operators in the future, was revealed at last month’s Forecourt Show by former Top 50 Indie John Ryeland.

Last seen as a director of the Hammond Group, which sold up to MFG in August 2021, John has embarked on a new project with Parkfoot Garages, owned by independent fuel retailer David Charman. Together they have created Aquatec Systems Ltd and will use Adriateh technology to create what could eventually become a chain of car wash centres focused in the south of England.

“Effectively the aim is to build standalone car wash centres and where possible - and where it’s appropriate - a food to go/snack/coffee shop, but no fuel,” said John. “Potentially the centres could have EV charging, although that could be with separate contractual arrangements.”

A three-quarter acre plot of land in Kent, near Ramsgate has been targeted for the first site which it is hoped will be operational before the end of the year.

“It will have a shop – not huge, about 60sqm – which will be more to do with food-to-go and coffee, but similar to the EV world where there’ll be a sit-down facility, snacking, coffee, customer toilets and so on,” explained John. “That’s the standard set-up we’re looking at. We’re due to roll out three to four per annum. Initially probably in the south, but not limited to the south-east - probably Midlands and lower so it’s manageable. We’re focusing on retail parks where possible.”

One of the challenges with retail parks has been around convincing landlords that the company is a bona fide car wash operator and not an unregulated hand car wash which, which John accepts means the Car Wash Association has done a good job spreading the word about such operators.

In terms of supplier for the centres, John already has long experience with the Croatian car wash centre specialist, Adriateh: “When I was with George Hammond, we visited Croatia in 2012, and were introduced to Adriateh technology to produce turnkey jet wash buildings. We installed the first one in 2012 on our site on the Isle of Sheppey – which was Adriateh’s first installation in the UK. We had three installations altogether, including at our Dover South and Three Elms sites. Parkfoot Garage also installed a four-bay operation.

“We maintained a relationship with Adriateh for that period of time, and continue to use their property, intellectual rights, and their equipment. Our design has six bays, and they’re all modular, so you can bolt more on if required. The most effective solution is six bays from a practical point of view.”

The centres will feature just jet washes, all self-serve, with separate vacuum bays, plus fragrance and tyre shine. The bays will all feature under-floor heating so they can be used all-year round. The plan is for all the sites to be hopefully bore-hole water supplied, so there will be complete resilience in terms of drought protection.

“It’s the simplest and most effective way of cleaning your car,” said John. “The advantage this product has is that you’re cleaning the car with 40degC water. So, whether you’re using a lance or a brush, you’re using hot water, and that means your car is getting cleaned properly, and it’s using spot-free reverse-osmosis water - the two most-effective ways to ensure the car comes out looking clean.

“With a six-bay you are generating 250-300-plus movements a day. It becomes a destination. At our Queenborough site people travelled 25 miles to use the washes. It’s one of those things where certain people really want to look after their cars.

“The other benefit of a multi-bay car wash is that if you have a single bay car wash you always fall into this trap that if it goes wrong someone could have travelled a distance and find it’s not working. With a six bay you can have one bay out but you’ve still got five bays to go. It makes a massive difference to people’s resilience and trust in the product. Things do happen, but generally speaking because of the way it’s structured, it’s protected it gives you a far more secure wash solution.

John said the centres will be cashless from launch: “Adriateh has its own app called Ready2Wash, which is a really successful app. We saw a 25% conversion rate from the start when launched with Hammonds. We will also have Euro Key which is a key fob system like an RFID tag.”

Adriateh manufactures its own equipment at its factory in Croatian capital, Zagreb. It also featured EV chargers on its stand at the show.

“Potentially if an Adriatech EV charger dovetails into the UK market that’s something we could adopt as well,” said John. “This format could potentially be the dealer forecourt of the future.

“It’s effectively a standalone business. The coffee shop is designed to pay for the staff that are operating the site, so there’s someone there that can monitor what’s going on and clean the site at the same time.

“Plus, if you find the right land mass there’s no reason why these centres couldn’t sit alongside an EV-only forecourt and have those businesses side-by-side.”