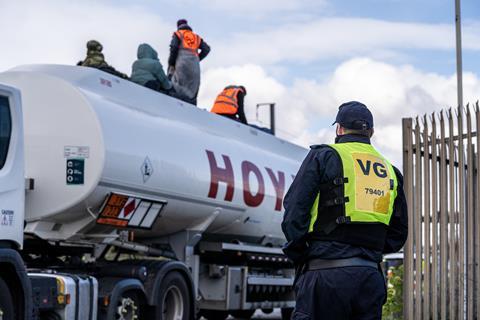 An injunction banning protesters from interfering in any way with petrol filling stations in Thurrock, Essex, has been obtained by the local authority.

The injunction, which was granted in the High Court on Sunday, also bans protesters from trying to block access to any oil terminals in the Thurrock, trespassing on their land, or tunnelling in their vicinity.

The move comes after more than two weeks of disruption at terminals in Thurrock where protesters have blocked roads and climbed on top of tankers and glued themselves on.

The group behind the protests, Just Stop Oil, took a break from its activities last week, but warned it would resume today if the government did not commit to immediately halt all future licensing and consents for the exploration, development and production of fossil fuels in the UK.

The injunction covers areas around the Navigator Oil Terminal in Grays, Inter Terminal UK’s site in Grays and Thames Oilport in Stanford-le-Hope, as well as other key fuel infrastructures sites and filling stations in the borough.

Anyone found to have breached the order could be found in contempt of court, imprisoned or have their assets seized.

In a statement announcing the injunction Thurrock Council said: “Over the last few weeks, three fuel terminals in Thurrock have been targeted by activists from protest group Just Stop Oil – causing disruption to the borough’s road networks, local businesses, waste collections and other frontline council services.

“The innovative legal measures prevent the activity and tactics protestors used to create disruption at these sites and is set to act as a deterrent to anyone who is thinking of coming to Thurrock to carry out similar activity in the area in the future.”

Despite Just Stop Oil’s announcement that it would hold off further action until today there were further arrests at Kingsbury in Warwickshire at the end of last week after police discovered a tunnel in the Trinity Road area, next to the Kingsbury depot.

Five people have been arrested on suspicion of criminal damage in connection with the tunnel. The road has remained closed while the tunnel is checked as the force said it could pose a risk for drivers.

The force said 199 people had been arrested at the site since 1 April.

The five arrested over the tunnel include men from Somerset, Devon and West Sussex and a man and a woman from London.

Two men, from Redditch and Manchester, were also arrested after protesters got into the depot on Saturday, police said.