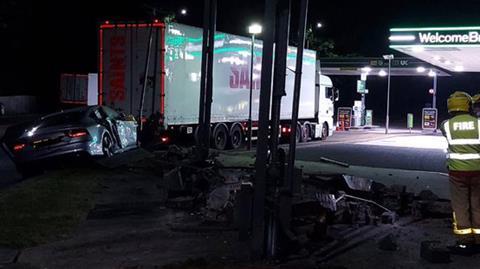 A drink driver who smashed into barriers “almost wiped out” Welcome Break’s fuel station on the south bound side of the M6 at Charnock Richard services, according to traffic officers from Lancashire Police.

The emergency services were called out to the motorway service station at about 1.20am today (Friday 18 June) following reports of car crash.

When police arrived the driver ran off, but he was arrested after a chase across fields.

Lancashire Police posted a comment on Twitter at 1.20am which read: “We are currently dealing with an incident at the Charnock Richard Services on the M6 Southbound.

“The filling station at Charnock Richard Services is being closed for the next few hours.”

Just before 6am the force released a second statement which said a driver had been arrested on suspicion of drink driving after a short chase.

The tweet read: “Drink driver almost wiped out the fuel station south bound on the M6 at Charnock Richard services then ran off. Arrested following a foot chase over fields. Now in Preston custody.”

With the post was a picture of a badly damaged car and a substantial amount of debris on the perimeter of the fuel forecourt.