‘Never mind the army driving tankers, I need them on my forecourt,’ says stressed retailer 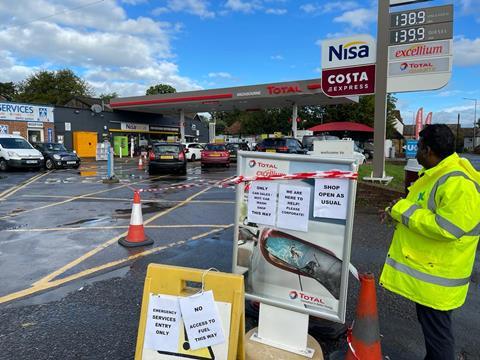 “Never mind the army coming in to help drive the tankers, I need them on my forecourt! I had 10 motorists fighting on the MFG site I run in New Barnet. It’s been very hard to manage.

“We have brought in a queue system, put up signage, and tried all we could, but some people are very aggressive. Staff are refusing to work. I don’t want to argue with people, most are fine, but occasionally we are getting abuse.”

Prem said his Total-branded Broxbourne forecourt was now out of fuel and closed, with one week’s normal load going in about 12 hours. The shop is still open but sales are down by two thirds.

“It’s been crisis management,” he said. ”We have helped the emergency services, and have tried to restrict fuel purchases to £50 for cars and £70 for trucks. We can’t do it automatically at the pump, so have to speak to drivers individually.”

He said there had been huge queues on the main road, causing a dangerous situation - at one point trapping a fuel tanker on the forecourt as word got round that a new delivery was being made.

“My fuel supplier Harvest Energy has been great brilliant in supporting me - keeping in touch. But I feel really stressed. This is going to take a while to settle down.”