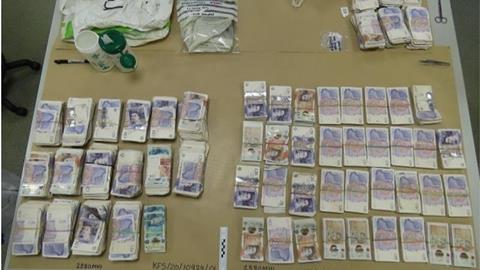 Five members of an organised crime gang who used a car wash business as cover for smuggling cocaine into the South West have been jailed for a combined total of 40 years and 11 months.

Some 3kg of the narcotic and £185,000 of cash was seized in a single day when officers swooped on key players following a surveillance operation led by Devon and Cornwall Police.

The five men were put behind bars at Exeter Crown Court on Wednesday 19 January, with one other, Michael Williams, due to be sentenced at a later date.

The jury were told Vasija was the ringleader and with his brother-in-law Lleshi used a car-wash business as cover for sending cocaine to Bristol, Devon and Cornwall.

They supplied Minchinton in Torbay; Williams in Bristol; Evans in Penzance; and Harrison in Plymouth, who all shifted the drugs on for sale.

Minchinton, Lleshi, and Williams were found guilty of conspiracy to supply cocaine following a month-long trial in October 2021.

Vasija, Harrison and Evans had all previously admitted the same charge.

Senior investigating officer detective chief inspector Ben Davies said: “This was a substantial and complex investigation in which large quantities of Class-A drugs destined for the streets of Plymouth, Bristol, Torquay and Penzance were seized.

“The large quantities of criminal money also recovered demonstrated the extent of the drugs empire and foothold in the South West of England.”

The offences happened in the second half of 2019.

Lleshi, 25, of Buckhurst Hill, Essex, was sentenced to 10 years and six months in prison.

Minchinton, 42, of Kings Drive, Brixham, was also found guilty of obstructing a police officer and sentenced to nine years and four months in prison.

Evans, 43, of Mount Lidden, Penzance, was sentenced to five years and seven months in prison.

Harrison, 27, of Torridge Way, Plymouth, was jailed for four years and four months.

Williams, 59, of Padstow Road, Bristol, is due to be sentenced at a later date.

All of the convictions are the result of a large-scale investigation by Devon and Cornwall Police’s Serious and Organised Crime Branch, aided by the South West Regional Organised Crime Unit.

The trial in October 2021 heard how Lleshi – an integral part of the supply line - clocked up thousands of miles in his Mercedes driving from Essex to the South West and back again delivering drugs and collecting cash.

Unknown to him, he was being followed by trained surveillance officers.

He was covertly watched making frequent and fleeting visits to Minchinton’s Brixham home carrying packages and bags to and from the property.

Jurors were told how Lleshi’s behaviour was the same when he visited Williams in Bristol, Evans in Penzance, and Harrison in Plymouth.

Police stopped him outside Williams’s home on 28 November 2019 and caught him with a bag containing 3kg of cocaine with a street value of £250,000.

Williams was also spotted in the house next-door, where his elderly parents lived, stuffing items into a carrier bag, the court heard.

Officers recovered a half-kilogram of cocaine and nearly £160,000 in cash in a cupboard under the stairs.

On the same day in Plymouth, police raided Harrison’s flat and discovered a drugs den with dozens of bags of cocaine – worth more than £10,000 – wrapped up ready for onward sale. There were lists of names, contacts and debts outstanding, as well as more than £1,500 in cash.

The address had been visited by Lleshi, with his familiar shopping bag, and Vasija on 9 November 2019 when they made a cocaine delivery.

Officers also raided the Penzance home of Evans on 28 November 2019 and recovered £10,000 of cocaine wrapped, or being prepared for, onward supply in his bedroom along with lists of names, contacts, and outstanding debts. Some £25,000 in cash was found in a chest of drawers next to his bed.

Police had previously followed Minchinton to the caravan park home of an associate in Chudleigh on 9 October 2019 and raided the property, recovering an ounce of cocaine worth £1,000.

In Brixham, officers had twice raided Minchinton’s home. On 12 July 2019 they seized an expensive, encrypted mobile phone and a set of scales from the kitchen, where traces of cocaine were found on the surfaces.

On 26 November 2019, further traces of cocaine on a spoon and plastic wrappings were discovered. Officers witnessed Minchinton flushing what was believed to be cocaine down the toilet as they entered the property.

DCI Davies added: “Sentences handed out today send a clear message to those who feel that they can transport drugs into our communities, set up and sell them.

“The judge was very clear that this group of criminals were sophisticated, organised and operating across the region.

“I commend the professionalism and dedication of the investigating team in Devon and Cornwall for the lengths they have gone to ensuring that the organised crime group were identified, arrested and convicted.

“This complex investigation took place during the national Covid pandemic which brought challenging conditions to both the team and Crown Prosecution Service (CPS).

“Working together ensures that those who commit serious organised crime will be dealt with robustly by the police and CPS.

“I thank the CPS and those that work within it for their continued support in making the communities of Devon and Cornwall safer for all.

“Devon and Cornwall Police will continue to pursue these organised crime groups in order to protect the communities they target.

“I would urge any residents to have the confidence to call the police or Crimestoppers to report drug-dealing activity so that we can be made aware and look to stop it as soon as possible.”

Ann Hampshire, senior crown prosecutor in the CPS South West Complex Casework Unit, said: “Because of the scale and complexity of these investigations, we worked closely with a team of specialist officers from Devon and Cornwall Police from 2019 to build a strong case against this organised crime group.

“The case took many months of careful investigation and preparation, as we needed to obtain and review vast amounts of material to build a picture of the criminal network. Covid restrictions impacted significantly on the investigation and prosecution of this case, but we were able to demonstrate the individual role that each defendant played in the large-scale county lines drug supply of cocaine from London into the South West.

“This organised crime group ran a substantial business operation distributing many kilos of cocaine into the West Country and generating hundreds of thousands of pounds of income. Proceedings continue to confiscate any assets that the defendants may have so that they do not profit from their crimes.”