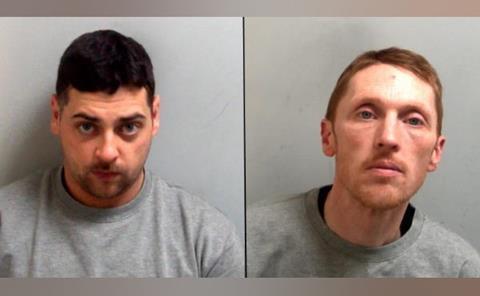 Two men who were caught 15 minutes after robbing a petrol station in Essex have been jailed.

Jamie Wilson (pictured above right) and Sam Chambers (pictured above left) walked into Toomeys Service Station in Westmayne, Basildon, at about 12.55am on 3 January, and Wilson waved a knife towards two members of staff behind the tills.

He grabbed one of them and pulled her to the floor. She was told to open the till and Chambers helped himself to bank notes while Wilson emptied 41 packets of cigarettes into a bag. The pair then fled.

During the robbery, the victim had activated a panic button, alerting the police.

Officers carried out a search and stopped a taxi with Wilson and Chambers in the back seat.

They found the knife, cash and cigarettes and arrested the pair at 1.10am.

Karen Baverstock, manager of Toomeys Service Station, said: “Hearing what happened to my staff and the impact it’s had on them breaks my heart. It was terrifying for them and the effects remain with them.

“I can’t praise the police enough for catching these violent men so quickly, it was fantastic, and I am glad they are now behind bars so they can’t hurt anyone else.”

Chambers, 29, of Wimbish End, Pitsea, and Wilson, 46, of Great Oxcroft, Laindon, were both charged with robbery.

Wilson was also charged with possession of a knife in a public place.

They admitted the offences at Basildon Crown Court on 2 February and were jailed on Friday 26 March.

Detective sergeant Danielle Hutton said: “These men were prepared to use violence to get what they wanted and I can only imagine how frightening it must have been for the staff on duty that night at the petrol station.

“But Wilson and Chambers hadn’t counted on the determination of the two officers from the Basildon local policing team, who found and arrested them within minutes of the robbery.

“I hope the sentences today will go some way to helping the victims feel safer now these criminals are behind bars.”