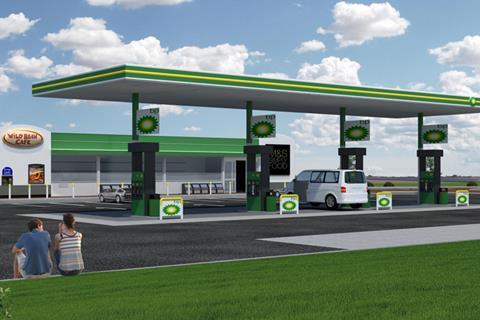 An image of how the services are expected to look

BP has won planning permission for a service station in South Lincolnshire after inspectors overturned a refusal by the district council.

Contruction company Lindum will start work on the new roadside services on land near the A15/A1175 roundabout at Market Deeping next year.

But the decision was appealed and this week, the Planning Inspectorate ruled that it could go ahead.

Inspector Susan Hunt said there was no evidence to suggest there wasn’t a need for the services. She also said the development would not usurp Market Deeping as the area’s primary shopping destination.

In her statement, she said: “There is currently one PFS (at the Co-op) which is located in the urban centre of Market Deeping away from any main through routes. While it would serve a local need, the evidence indicates that it is unlikely to adequately accommodate the needs of longer distance traffic which bypasses the Deepings (HGVs in particular).

“There is no evidence before me which would lead me to conclude that there is not a justified need for a new roadside service area in this location which would primarily serve passing traffic including HGVs.

“Its size, format, and distance from existing residential properties would largely discourage the retail space from being a destination in its own right. The town centre of Market Deeping would continue to serve as the primary shopping destination for local residents.”

Inspector Hunt also said the proposed development would not appear entirely out of context with its surroundings.

“It would inevitably result in a significant new element of built development in the open countryside and an irrevocable change to the rural character and appearance of the area. Notwithstanding this, it is not within an area of countryside which is devoid of urban features,” she said.

“The landscape sensitivity is reduced by the proximity of the appeal site to the settlement of Market Deeping and the surrounding roads and sizeable five-arm roundabout with associated lighting and signage. The footway/cycleway alongside the A15 and two laybys provide further urban influence.”

Lindum development manager Mitul Shah said he was delighted that the scheme could now go ahead.

“We are really pleased the planning inspector has supported BP’s plans and we strongly believe this will be a welcome addition to the road network in south Lincolnshire,” he said.

“The scheme complies with the Development Plan and the National Planning Policy Framework. It will also create jobs and will make a positive contribution to the local economy.

“In addition, the proposed location means traffic from the nearby industrial estate will have no need to venture in and out of town for fuel or essentials.”