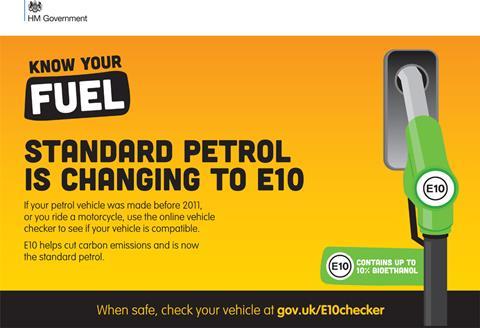 E10 has become the new standard grade of petrol today, but nearly a quarter of motorists are unaware of the change according to the RAC.

The fuel is arriving across forecourts in Great Britain now, and is due to arrive in Northern Ireland in early 2022.

E10 petrol contains up to 10% bioethanol, replacing E5 which has up to 5%, and is being introduced to cut carbon dioxide emissions.

According to the Department for Transport the introduction could cut transport CO2 emissions by 750,000 tonnes per year, which is the equivalent of taking 350,000 cars off UK roads.

Over 95% of all petrol vehicles are compatible with E10, with older vehicles, about 600,000 including classic cars and some from the early 2000s, still able to access E5 petrol in the Super grade.

Transport secretary Grant Shapps said: “Every journey matters as we drive forward the green industrial revolution, which is why the rollout of E10 is so important. It’ll help us cut road greenhouse gas emissions and meet our ambitious net zero targets.

“Although more and more drivers are switching to electric, there are steps we can take today to reduce emissions from the millions of vehicles already on our roads – the small switch to E10 petrol will reduce greenhouse gas emissions as we accelerate towards a greener transport future.”

However attempts to publicise the change on forecourts have failed to register with many motorists.

According to the RAC, a survey found more than a quarter of drivers (27%) are yet to check whether their car is compatible with E10 petrol and 24% are unaware that the new fuel is being introduced.

The RAC is encouraging drivers to check their vehicle’s compatibility with the new blend of petrol as soon as possible via the free official online checker.

RAC head of policy Nicholas Lyes said: ““E10 petrol has already started appearing on forecourts to replace the old E5 blend, and that process will continue at pace in the coming weeks.

“But while the vast majority of drivers of petrol cars aren’t affected, a sizeable minority will be and the only way to be sure is to use the official online checker. Those that discover their cars aren’t compatible will unfortunately need to seek out and pay for a hefty premium for E5 super unleaded fuel instead. The cost of doing this could quickly add up for people who need to use their cars regularly, something our research shows all too plainly. Drivers who will continue to rely on E5 will also need to make sure the filling station their visiting stocks the fuel in the first place, or risk running out of fuel and having to call on their breakdown provider.

“We’d also like to remind owners of classic cars that need to be careful not to accidentally top up with E10 and then leave it sat unused in the tank for long periods, something which can lead to expensive damaged plastics, metals and seals.”

ACS chief executive James Lowman said: “From today, E10 petrol will be introduced as the UK-wide standard petrol grade at pumps and we have been urging fuel retailers to ensure that they are prepared for this change, have briefed their staff and communicated the change to their customers to avoid confusion.

“Our Selling and Storing Fuel Assured Advice guide provides more information on fuel labelling requirements and if you have any questions about the rollout and what it means for your business, please do not hesitate to get in touch.”

For more about the implications of the launch of E10 for forecourt operators click here.