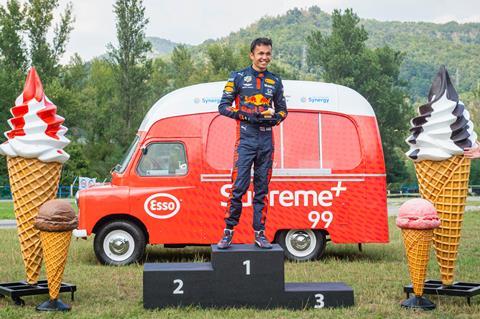 Esso has announced the launch of its first 99 Octane fuel – Synergy Supreme+ 99. The new premium fuel will be available on forecourts nationwide from October 14, with the exception of 140 sites in the north west, which won’t have supply until next year.

The high-spec fuel fills a gap at the top end of Esso’s forecourt fuel line-up and gives retailers a product to challenge Shell’s V-Power unleaded. Currently the highest-spec Esso fuel available to the motorist is 97 RON.

In a broad-ranging marketing programme that will cross digital and partnership channels as well as the forecourt, and includes humorous advertising films – one of which features F1 Red Bull driver Alex Albon – Esso will be targeting two different types of audience.

The first is the estimated 6.72 million performance achievers – a young, majority male segment, heavily engaged with vehicles, motoring and motorsport. They are tech-savvy and interested in innovations both within and outside the category. Esso knows they are typically V-Power customers, but are intent on coaxing them to try Synergy Supreme+ 99. Performance achievers are described as a niche set of customers who will be targeted on digital media and through Nectar channels.

Meanwhile forecourt messaging will target Esso’s ‘normal’ customers – referred to as ‘Charlie & Sarah’ – who are not too concerned about octane but need to be reassured that the new product is still going to give them the quality reassurance and care for their car that they want.