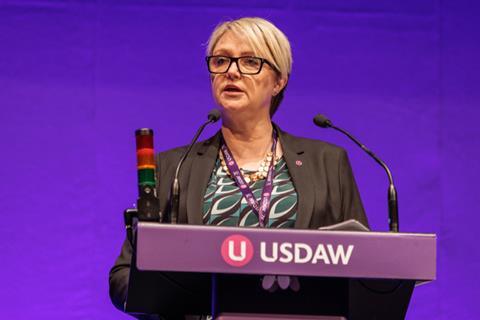 One in four workers in the food retail industry is skipping meals every month in order to pay bills, according to the retail trade union Usdaw.

It said this was the finding from its most recent cost of living survey of more than 5,500 members, and was up from

The survey found that one in four of these workers are skipping meals every month to pay bills, which is up from one in twenty in February 2021, and one in seven in February 2022.

The results of the survey were published on the day Usdaw’s president Jane Jones addressed the TUC rally in Parliament Square. She said: “We’re demonstrating today so that the voices of working people are heard loud and clear in the corridors of power, because enough is enough, working people deserve so much better than this.

“We work hard, we show up every day and do the jobs that keep the country running. We deserve respect, but this Government laughed at us when they partied through the pandemic and now they are now telling us that we are the ones who will have to pay for the pandemic.

“Make no mistake this is a crisis of their making, a Tory cost of living crisis. Ripping away at the social security safety net and ripping apart the fabric of our society. They are failing at every turn to take the action we need, urgent action to stop people falling into poverty. Last year, one-in-twenty of our members told us they skipped meals to pay the bills every month. This week, we found out that’s gone up to one-in-four.

“One-in-four of the people working hard to keep food on Britain’s tables are struggling to put food on their own table. Instead of tackling this, the Government is hamstrung by infighting, sullied by scandal, doing nothing other than trying to save themselves. While they play politics rather than governing, our communities pay the price.

“We need a pay rise and a new deal that gives every worker decent pay and secure hours. A new deal that transforms our social security system into a proper safety net. A new deal where working people can thrive, rather than struggling to survive.

“We cannot accept that workers are condemned to live on poverty pay; that they are not even guaranteed the working hours they need to get by from one week to the next. Shopworkers, distribution workers, manufacturing workers, in constituency after constituency are watching. We need action and we need action now.”