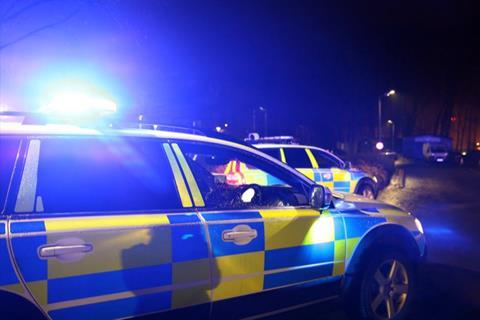 Police chased three suspects from an M1 service area into fields after musical instruments were stolen from a lorry in the middle of the night.

Officers gave chase from Trowell Services (northbound) in the dark through a ditch, over an embankment and scaled a fence to catch those responsible.

Nottinghamshire Police was called just before 2.30am on Tuesday10 August by a lorry driver who was woken up by what he thought was people moving about in the back of his parked vehicle.

The driver had parked the lorry at the motorway services and was asleep when he was woken up by movement in the back.

He called 999 and officers arrived moments later to find a small group of men unloading boxed goods from the lorry and placing them into a van.

The group fled but three suspects were all quickly detained by officers and a police dog.

Two men aged 24 and 32 were arrested along with a 15-year-old boy on suspicion of theft from a motor vehicle.

A stolen van – believed to be from Leeds – was recovered from the scene.

Detective sergeant Julian Eminson-Ferry, of Nottinghamshire Police, said: “This was a swift response from officers who were on the scene within moments and faced an assault course of obstacles as they gave chase.

“Thanks to the combined efforts of officers on the ground and the police dog unit, we were able to make these arrests.

“Theft can have a devastating financial effect on people and businesses and we’re determined to do all we can to disrupt those who look to profit by it.”