Ringleader of tobacco-smuggling gang jailed for more than eight years 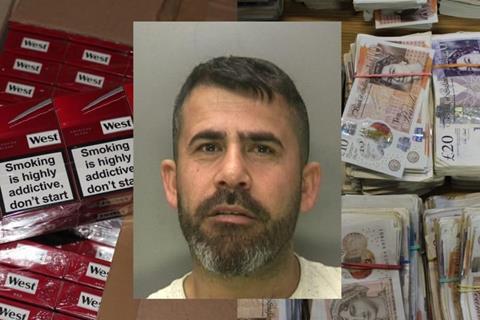 The ringleader of a criminal gang that attempted to flood the UK with more than 79 million illegal cigarettes has been jailed for more than eight years.

Ary Majeed, of Tennyson Road, Coventry, spearheaded an illegal cigarette and money laundering operation, using a fleet of vehicles and a network of couriers.

HM Revenue and Customs (HMRC) seized millions of cigarettes from Majeed’s network of suppliers. The cigarettes were found on lorries and inside shipping containers and storage units, some of which were hidden among medical supplies.

Investigations connected him to cigarettes worth more than £22m in unpaid duty.

The 36-year-old was also involved in laundering the criminal profits, alongside Damian Lukaszuk, 35, of Faysholme Stud, Warfield, Bracknell, and Miroslaw Koksanowicz, 55, of Yarmouth Road, Stevenage.

“Cheap cigarettes come at a cost as they often fund other organised crime and illegal activity that causes real harm to our communities, such as drugs, guns and human trafficking. Smugglers are criminals who don’t care who they sell to, including children.

“We encourage anyone with information about the illegal sale of tobacco or alcohol to report it online, or call our Fraud Hotline on 0800 788887.”

Majeed was a significant player in an organised crime gang and was responsible for distributing illegal cigarettes to buyers and laundering the criminal profits.

HMRC made several cigarette seizures from his supply lines between May 2018 and April 2019 at locations across the UK, including:

Enquiries revealed that a further 48 million cigarettes were smuggled into the UK and were distributed by Majeed’s network.

The 79 million smuggled cigarettes were worth more than £22m in unpaid duty in total.

Majeed was arrested by HMRC officers at his home on 25 April 2019 and mobile phone evidence confirmed his criminality.

Lukaszuk was involved in attempts to move £1.2m cash which was seized at Eastern Dock, Dover, in March 2018. The money was found concealed inside a car and an industrial machinery unit, on the back of a lorry.

He was caught carrying £80,000 cash after he was stopped by police in Coventry on 19 November 2018. Koksanowicz was a passenger in the vehicle and both men were arrested at the scene. A further £6,000 was then recovered from Lukaszuk’s home.

Lukaszuk had also previously been caught trying to smuggle 37,000 cigarettes into the UK through the Channel Tunnel in 2015.

Majeed was found guilty of two counts of cheating the public revenue, and two counts of money laundering, on 15 July 2021, following a trial at Warwick Crown Court.

Koksanowicz admitted participating in the activities of an organised crime group on 17 June 2021.

Majeed and Lukaszuk were sentenced at Warwick Crown Court on 20 August.

Another man, Radoslav Vavlic, of Slovakia, was caught transporting £125,000 cash which had been given to him by Majeed. He was sentenced to 27 months in prison at Warwick Crown Court on 19 September 2019.