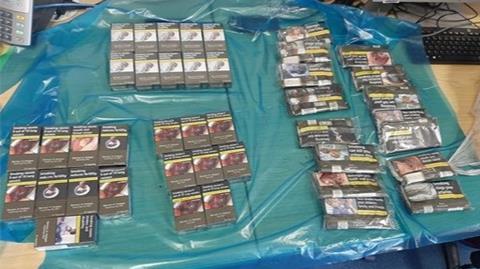 Tristram was found in possession of 27 boxes of cigarettes, 15 pouches of tobacco and £170 in cash

A man from Hertfordshire has been jailed for more than two-and-a-half years after admitting robbing a petrol filling station in Peterborough.

Liam Tristram, 32, entered the Shell garage in Boongate at about midday on 8 August and tried to purchase cigarettes worth £67, however his bank card was snapped and he exceeded the contactless payment limit.

Telling staff he would return with cash, Tristram left and came back about two hours later and saw no staff were behind the till. He jumped over the counter and began filling a bag with cigarettes.

When a member of staff challenged him, he pulled something out of his pocket and said he would “spray” her.

Tristram continued to fill bags with tobacco and forced open a till, taking cash out of it, while the member of staff locked the doors and hid behind an aisle.

He went to leave the store but on finding the door was locked he chased her around the shop and forced her to unlock the door so he could escape.

Police were called and CCTV operators were able to track Tristram, observing him getting into a taxi.

Officers stopped the car and arrested Tristram who was found in possession of 27 boxes of cigarettes, 15 pouches of tobacco and £170 in cash.

Tristram, of no fixed address, appeared at Peterborough Crown Court on Monday 30 November and was sentenced to 32 months in prison for robbery.

In July, Tristram was sentenced to six weeks in prison, suspended for 12 months, after admitting stealing £71.05 worth of cigarettes from WH Smith and £80 worth of chocolate from B&M, both in Bridge Street. This sentence has been activated and will be served alongside the 32 months.

Police constable George Corney said: “This was an extremely distressing situation for the member of staff who thought Tristram was going to spray her with acid.

“Following a joint effort by CCTV operators, those in our control room and officers on the ground, we were able to act quickly and apprehend Tristram just moments after the crime.”