Three men have been jailed following an investigation into a burglary at Whiteclosegate Service Station on Brampton Old Road, Carlisle, on November 6 last year. 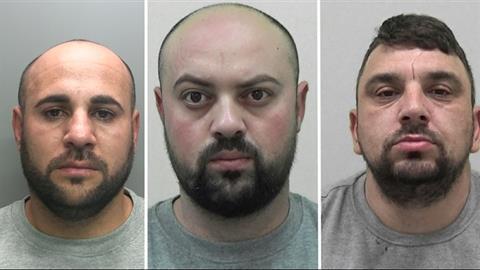 From left: Bratianu, Christea and Iosif

Police were notified of an alarm sounding at the service station and on the arrival of responding officers, two men ran off from the building. A foot chase ensued and Gheorghe Bratianu was detained.

At the same time, a black Range Rover was driven towards officers on Houghton Road before making off in the direction of Brampton. The same vehicle was stopped a short time later in Northumbria and Leonard Christea and Ionut Madilin Iosif,were arrested.

Inquires found that the offenders had caused damage to the building, an ATM and to wires at the entrance of the store. Once inside the service station they stole £300 in cash and £150 worth of cigarettes.

All three pleaded guilty at an earlier hearing to conspiracy to commit burglary.

Temporary detective constable Mark Hutchinson, North Cumbria Crime and Safeguarding Team, said: “We are pleased that these three individuals have been brought to justice.

“Today’s sentencing sends out a clear message to those viewing Cumbria as an easy target to commit crime. The three men had travelled across from the North East of the country to target this service station. We work closely with our colleagues in neighbouring forces and this has once again proven effective during our response to this incident.

“Our subsequent investigation was able to identify and piece together overwhelming evidence which resulted in these convictions.”