Openreach, one of the country’s largest fleet operators, has placed an order of 270 fully electric Vivaro-e vans and 9 Corsa-e cars. 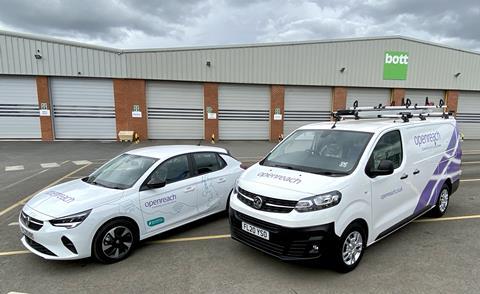 With around 27,000 vehicles, Openreach operates one of the UK’s largest fleets, and has run diesel versions of the Vauxhall vans for the past 15 years.

The move comes shortly after The UK Electric Fleets Coalition, of which Openreach is a founding member, released its policy requests to the Government, asking for a target to be set for 100% of new car and van sales to be fully electric by 2030 (with exceptions for the small number of vehicles where this may not be possible).

The Vauxhall Vivaro-e is available with two battery options, with the 50kW unit achieving 143-miles of range under WLTP testing, while the 75kW unit extends the operational range to 205 miles.

The Vauxhall Corsa-e has range of up to 209 miles from a single charge and can achieve an 80% charge in 30 minutes using a 100kW rapid charger.

Openreach CEO Clive Selley said: “Openreach is leading the charge on the transition to electric vehicles. Our order today is an important first step as we begin to move our fleet, the second largest commercial fleet in the UK, to being fully electric.