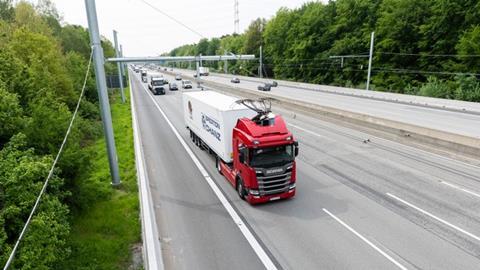 A Scania HGV operating on an ERS demonstrator in Germany

CSRF is backed by government research grants through the Engineering and Physical Sciences Research Council (EPSRC) and industry partners including Tesco, Sainsbury’s and John Lewis.

The report says an Electric Road System (ERS) is the primary candidate to deliver the energy needed by the UK’s long-distance HGV fleet.

Following the downturn due to the Covid-19 crisis, CSRF says that such a system presents an opportunity to stimulate investment and jobs, while electrifying major roads to quickly and cost-effectively decarbonise HGVs.

It proposes that cables would link to lorries driving in the inside lanes on 4,300 miles (7,000km) of UK roads through an extendable rig known as a pantograph – similar to those on the top of electric trains. The electricity would power the lorry’s electric motor, as well as recharging an onboard electric battery that would power them to their destinations beyond the electrified roads.

A lorry fitted for electric roads would only require a battery of similar size to an existing Tesla car to be able to cover the vast majority of the UK, according to David Cebon, a professor of mechanical engineering at Cambridge University who co-authored the study.

CSRF says that truck manufacturers including Scania have indicated they can deliver the modified vehicles and have delivered numerous prototypes for demonstration trials around Europe. The engineering company Siemens has already carried out extensive tests of e-highway electric road systems in Germany, Sweden and the US.

The White Paper sets out the case for a nationwide rollout of ERS through the 2030s. It says that a total investment in the region of £19.3bn would be required to electrify almost all the UK’s long-haul freight vehicles, corresponding to 65% of road freight movements.

The remaining 35% of freight movements are mainly urban deliveries that are expected to move to battery electric lorries over the next 10 years. The authors say that work could get under way immediately with an £80mn pilot project in the North East of England.

The report claim ERS would be three times more energy efficient than green hydrogen trucks because energy is lost at each conversion: using solar energy to make hydrogen and then a fuel cell to generate electricity again.

The authors say that an electric road system would also have a major advantage over alternatives in that it would be possible to tax the electricity used by lorries, enabling the government to easily replace revenues lost from taxing diesel fuel.