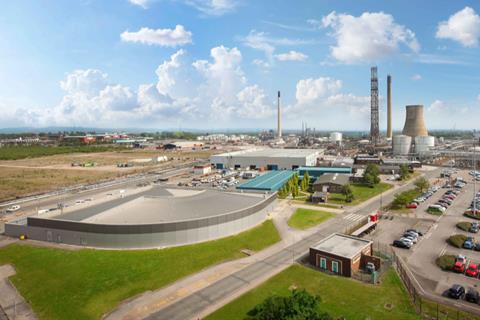 Essar has formed Vertex Hydrogen Limited, a joint venture with Progressive Energy, to build what it claims will be the UK’s largest hydrogen hub, at its Stanlow manufacturing complex.

The initiative aligns with a wider strategy by Essar globally to invest in energy transition through the transformation of existing portfolio companies, and investments in new ventures.

The low carbon hydrogen facility at Essar Stanlow will sit at the heart of the HyNet low carbon cluster in the north-west of England and north Wales, and is forecast to produce 1GW per year of hydrogen, across two units, from 2026. This is equivalent to the domestic heating energy used by a major British city region, such as Liverpool.

Waste fuel gases from Essar Stanlow and natural gas will be converted by Vertex Hydrogen into hydrogen, with carbon dioxide captured and stored by HyNet partner Eni SpA, underground offshore in Liverpool Bay.

The hydrogen production hub will provide low carbon energy to replace fossil fuels in industry across the HyNet region, as well as heating homes, and fuelling buses, trains and trucks.

A total investment of approximately £1bn will be committed to deliver the hydrogen production hub.

Essar chairman Prashant Ruia said: “Essar is committed to investing in energy transition and is building a portfolio of companies in this space. Vertex Hydrogen is a central component of that vision, which will be instrumental in helping create a hydrogen future for north-west England and north-east Wales. This will see over £1bn of investment, thereby creating jobs and supporting local communities for decades to come.”

Essar chief executive officer Deepak Maheshwari commented: “Vertex Hydrogen is a critical investment for Essar in helping it achieve its vision of becoming the UK’s first low carbon refinery and supplying UK markets with the sustainable fuels of the future.”

Chris Manson-Whitton, director at Progressive Energy, explained: “As the founding developer of HyNet, we see the launch of Vertex Hydrogen as a key milestone. Vertex is central to unlocking the low carbon hydrogen economy, reducing emissions, creating a cleaner world for future generations whilst creating and safeguarding jobs.”