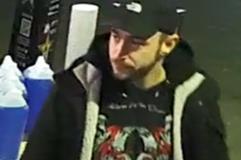 Police in Sheffield have released a CCTV image of a man they would like to speak to after a fuel pump and car were set on fire on a forecourt while the driver was filling up.

The incident is reported to have occurred on 13 April between 11:20pm and 11:40pm, when a taxi driver went to the Shell Service station in Netherthorpe Road to refuel his vehicle.

A man approached him and asked for a cigarette. He then leaned over the fuel nozzle and set the fuel alight, causing the vehicle and pump to be engulfed in flames.

Significant damage was caused to the vehicle and petrol pump. The man fled the scene on foot behind the station.

The fire was extinguished by staff and no one was injured.

Officers said they wanted to speak to the man in the CCTV image as he may be able to assist with enquiries.

Anyone who recognises him is asked to call 101 quoting incident number 1086 of 13 April.